A college-led skills competition for apprentices has been hailed a huge success by industry leaders, after four students won a sponsored place to a prestigious national engineering competition.

Over 30 Electronic Fire and Security modern apprentices competed in the two-day challenge, travelling from as far as Aberdeen and Dumfries to attend the specialist facilities in the College’s Motherwell Campus.

They were challenged with taking on a variety of tasks in two stages – fire alarm installation and intruder alarm installation. They were assessed by Trevor Jenks from SSAIB on their level of skill in health and safety, installation, testing and recording of operational checks and handing over of the system.

The winners from each stage and overall winner from each day have now been offered a sponsored place at this year’s Engineers of Tomorrow competition, which will take place during London’s IFSEC International in June, where apprentices from all over the UK can prove their skills on an international platform and the chance to win £1,000.

In the fire installation challenge, Aaron Wilson from WRB in Dundee and Steven Flannigan from CSS in Glasgow were named the winners, while Steven also excelled in the intruder alarm installation challenge alongside Andrew Tham from Observitas in Airdrie. Overall champions on each day included Steven, alongside Stuart McLuskie of Nexus in Glasgow. The four will now go on to compete in London. 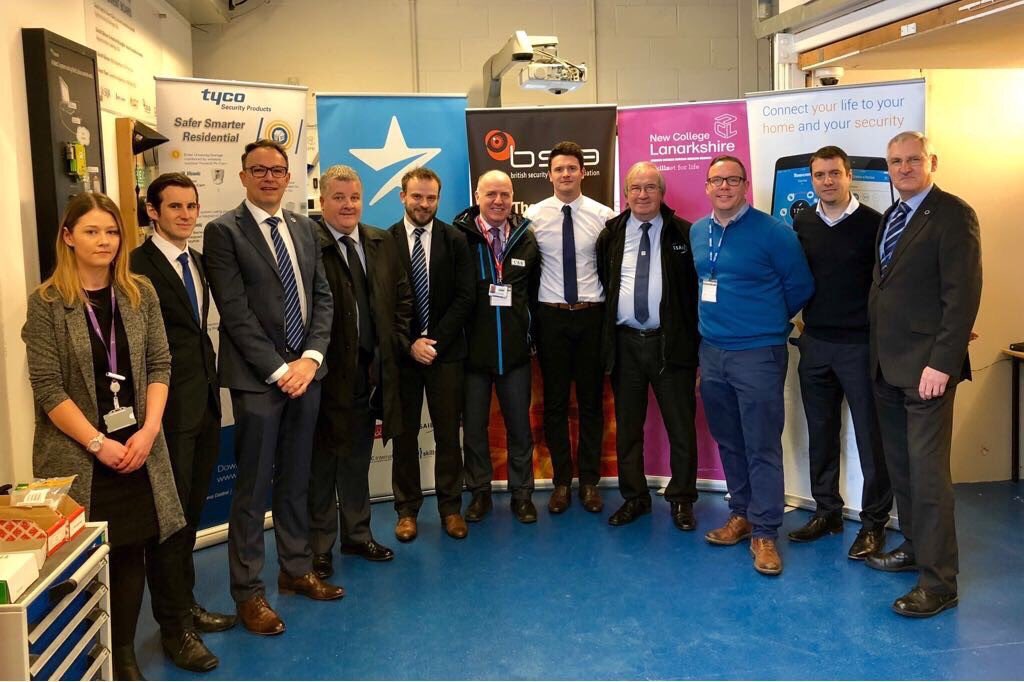 David Scott, Curriculum Quality Leader of Built Environment at the College and organiser of the competition, said: “In the third year of their apprenticeship, the competitors performed to an excellent standard, well beyond what is normally expected of someone at this stage of their course. This is testament to the high standard of training they are receiving onsite with their employers and at college.

“It was a privilege to have so many industry experts and partners in attendance to watch the competition. It created a real buzz around the competition – at one point there were over 60 visitors from all over the sector and our apprentices continued to perform at an advanced level.

“I’d like to thank all our partners who took the time to attend the competition and support our apprentices and the College. In particular I’d like to thank Simon Banks, Founder of Apprentices for Fire & Security (A4FS) and Group Managing Director at CSL, who was one of the main driving forces behind the huge success of this year’s competition. Simon agreed to not only attend the event, but allocated additional time to promote the event with his contacts and CSL’s Marketing Manager helped to drive the engagement internally within the security industry. With the help of Simon, we were able to reach the National Security Inspectorate (NSI) and Security Systems Alarm Inspectorate Board (SSAIB) who supported this year’s event by having Richard Jenkins. Chief Executive of NSI, and Trevor Jenks, Training Manager of SSAIB, attend. Both are huge advocates for apprenticeships and promoting the standards within the fire and security industry.

“Overall the most important thing for me was that the students that absolutely loved it. There was a lot of nerves in the morning, but as the competition came to an end everyone said they had fantastic experience.

“I am delighted for Aaron, Steven, Andrew and Stuart, who will now go onto compete in Engineers of Tomorrow – one of the most prestigious competitions in industry. New College Lanarkshire has always been very successful at this event, so we are hoping to continue that success this year.”

Simon Banks added: “It was great to support the College’s Skills Challenge. The high levels of competency shown by the young apprentices was exceptional and they are a credit to David’s team.

“Seeing so many people from across our Industry joining to show their support is very encouraging. Installers, manufacturers and associations all putting aside competition to focus on reversing the skills shortage is very encouraging. Our challenge now is to replicate this success across the rest of the UK.”

Industry visitors from across the UK visited the College to watch the competition and learn about how New College Lanarkshire is leading the way in improving the skills shortage within the fire and security industry. Alan Wheelan, Chairman for the British Security Inspectorate Association (BSIA) and long-standing supporter of the apprenticeship programme, travelled from Selkirk to watch the competition with his son.

He said: “As Scottish Regional Chairman for the BSIA and an employer with my own apprentices, I am delighted to offer my support to work being undertaken by the college.

“The skills gap in the fire and security industry is evident for all to see but the manner and quality in which the Modern Apprenticeship is being delivered at New College Lanarkshire is certainly one in which the industry north of the border can be proud of, as it continues to go from strength to strength and is the envy of many a training provider across the UK.”

Throughout the event, staff from the College provided training on a range of products that are used on the apprenticeship programme, including Honeywell Galaxy Intruder Alarm, GENT by Honeywell Fire Alarm and Texecom Intruder Alarm systems. 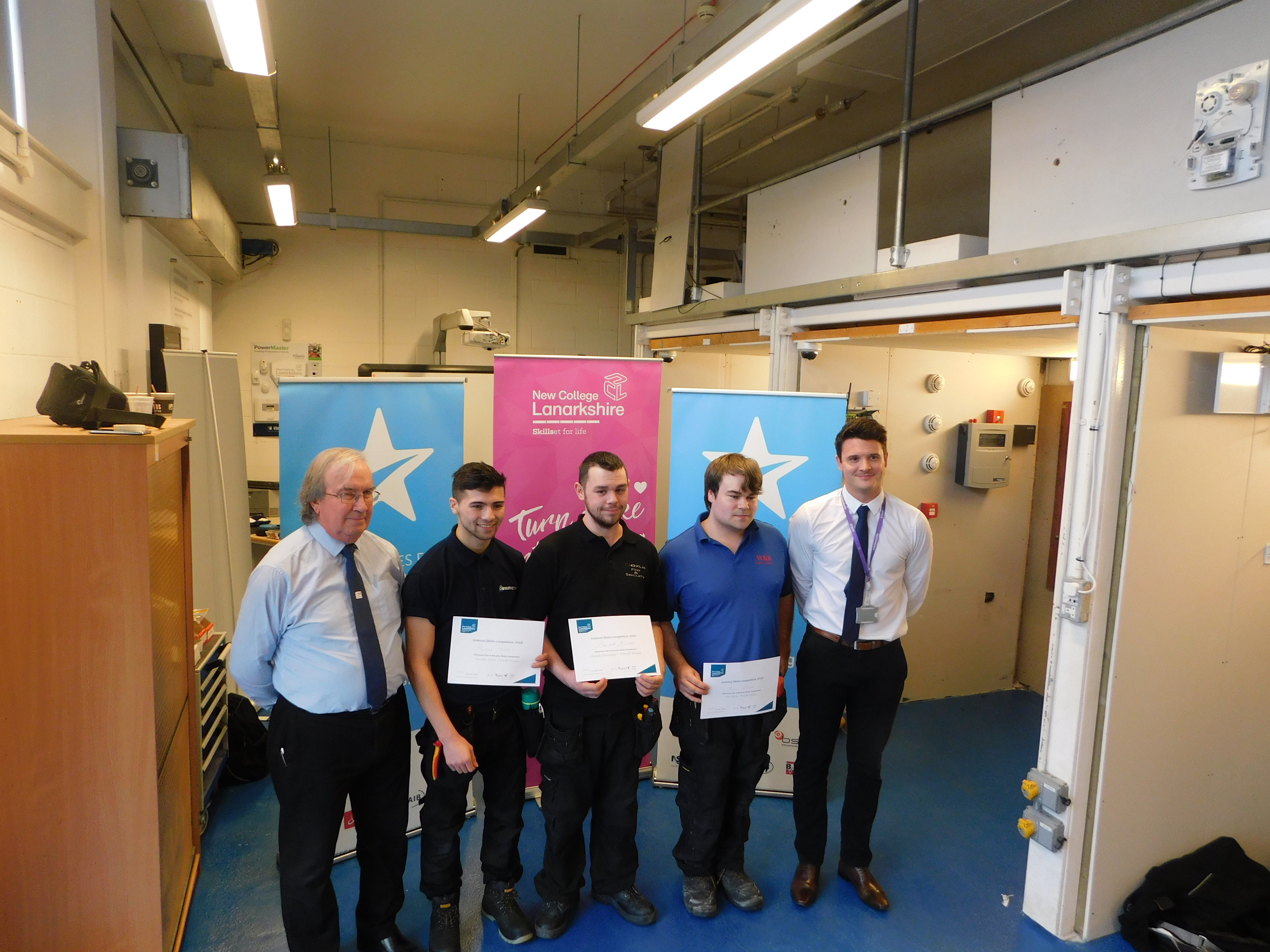 Paul Saunders from Visonic by Tyco and Matt Broughton of CSL also offered training to employers and students, while Albert Hall attended from Risco Group, a new partner of the Modern Apprenticeship programme, to get a feel for the work that is being carried out in the College.

Texecom also added to the excitement of the event by donating four premier elite 48 kits to the College to help develop and improve the course delivery.

For more information about the Electrical Fire and Security Apprenticeship, visit: http://www.nclanarkshire.ac.uk/courses/electrical-and-electronic/electronic-fire-and-security-adult-apprenticeship

For a video of the day's events, click here.