A chef lecturer from New College Lanarkshire was invited to judge at a major culinary competition in Germany.

Ann Brown, who is known as the industry’s ‘Marzipan Queen’, was one of only a handful of women chefs in the 68-strong international jury at the recent IKA Culinary Olympics in Stuttgart.

It is the third time that Ann has been invited to act as a judge at the competition, which is described as the largest and most diverse international culinary arts competition in the world. 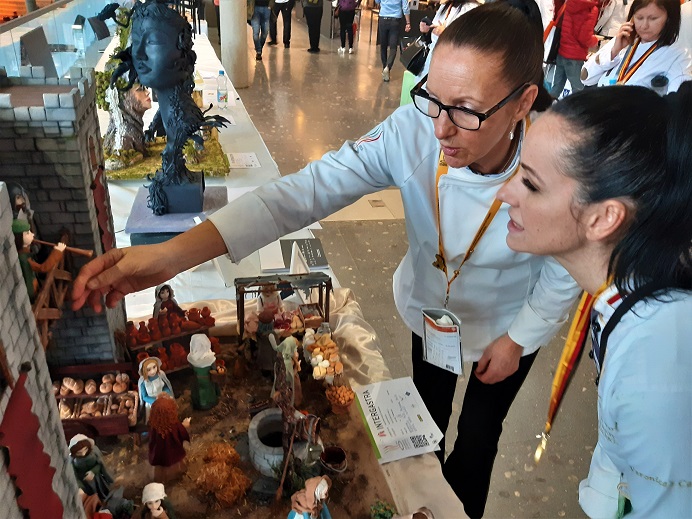 This year’s event, organised by the German Chefs’ Association, attracted around 1,800 chef competitors from 67 countries to showcase their skills over four days at Stuttgart’s exhibition halls.

Having garnered a global reputation for her pastry work and food artistry during a career spanning three decades, Ann combines her teaching work at our Motherwell Campus with judging competitions across the UK and internationally.

Ann’s role as a judge in the pastry art category ‘D2’ involved evaluating between 75 and 105 showpieces each day.

She said: “This was the first time that the Culinary Olympics had been held in Stuttgart, so it was nice to be part of a little bit of history.

“The time spent judging in this competition far exceeded any other I have been a part of – and my alarm was set for 4.15am each morning!

“I was the only female judge from the UK and, in a predominantly male-dominated profession, it was a fantastic feeling for me personally to be given the opportunity once again to represent my country.

“If I can inspire others to follow in my footsteps, then that has to be a positive.”

Ann has worked for New College Lanarkshire, and its legacy institution Motherwell College, since 1997.

She teaches HNC Professional Cookery/Patisserie, in addition to delivering pastry units in other Hospitality courses.

Born and raised in Liverpool, Ann moved to Scotland in 1987. After winning a place in the Federation of Chefs Scotland’s ‘Scottish Culinary Olympic Team’ in 1993, she travelled all over the world for more than a decade picking up medals for her culinary artistry.

In recent years, she has turned her attention to judging and her expertise is regularly utilised at both domestic and international competitions.

In 2017, Ann became the first female to be made an honorary member of the elite Emirates Culinary Guild.

In her role as a committee member of the World Association of Chefs’ Societies (WACS), she has hosted events for Lanarkshire schoolchildren in our training kitchens as part of International Chefs Day.

Ann added: “Judging at these competitions allows me to keep up with trends in pastry, especially in the modern techniques, moulds, flavours and natural colours being utilised – and I can incorporate this into my teaching.

“The more that students are aware of competition events, and what they can offer, then this can prove very beneficial in their future careers.

“Many of my students who have been given a taste of expressing their skills in competition have never looked back! 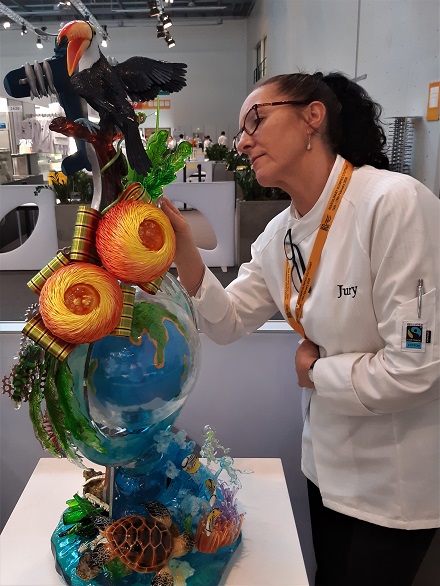 “Not only do their skills improve, but confidence in their ability as a pastry chef also improves.

“Just showing the students photographs of a competition arena and what is on show really fires them up and can prove inspirational.”

Sian Worthington, Assistant Head of Faculty of Service Industries, said: “Ann has brought all her knowledge and experience as a competitor in the early days and now as a judge back to New College Lanarkshire for the benefit of our students.

“We are delighted that Ann has been recognised personally and professionally by her invitation to judge at the IKA Culinary Olympics in Stuttgart.

“Ann’s national and international judging ensures that students and staff of New College Lanarkshire have access to the newest trends and techniques used by patissiers and pastry chefs the world over.”

Read more about our range of Hospitality and Professional Cookery courses here: