Performing Arts students from New College Lanarkshire are preparing to dazzle audiences in a pantomime production of Cinderella.

The co-production with South Lanarkshire Leisure & Culture will see current HNC Musical Theatre students form the ensemble alongside a cast of principal actors made up of recent graduates from the College.

The classic rags-to-riches story of an enslaved Cinders magically transformed into a glass slipper-wearing princess will open tonight at the Town House in Hamilton before transferring to Rutherglen Town Hall.

This is the fourth year of the partnership, following on from the success of Jack and the Beanstalk, Aladdin and last year’s production of Sleeping Beauty.

The show’s writer and director Richard Gray said: “The students always come to us at an exceptional level – they’ve got a very good work ethic and they’re always working to an incredibly high standard.

“The great thing about panto is that the whole family makes a point of going to see it together, and you don’t often get that shared experience throughout the rest of the year.”

The 47 students from HNC Musical Theatre are split into three rotating casts, with three students from the course chosen to play the Fairy Godmother.

Rehearsals began in August on numbers that include Can’t Stop the Feeling by Justin Timberlake, Better When I’m Dancin’ by Meghan Trainor, Secret Love Song by Little Mix and Let Me Love You by Justin Bieber.

Musical director and Musical Theatre lecturer Alan Currie said: “This really throws our students in at the deep end, because the energy that you need for panto stays high throughout the whole show.

“The jump from what they’ve been doing in school or youth theatre to this level is great for their training.

“It’s really good to be able to say to students on their first day in College that their first big project is being part of a professional production.”

The title character is being played by Rachel Campbell, a recent graduate of BA (Hons) Musical Theatre.

The 21-year-old from Airdrie made her panto debut as part of the ensemble in Jack and the Beanstalk in 2013.

She said: “I’m very excited. It was a big surprise when I got the role because this is my first professional job.

“There’s so much more to learn and it’s so much fun getting to know everyone in the cast.

“I don’t think it will all sink in until I get into the performances and I can see all the kids’ faces staring up at me.

“The training I had at College was amazing. I honestly wish that I could go back every single year.

“I have so much to be thankful for in everything that I do now and the confidence that it has given me to go out and do auditions.” 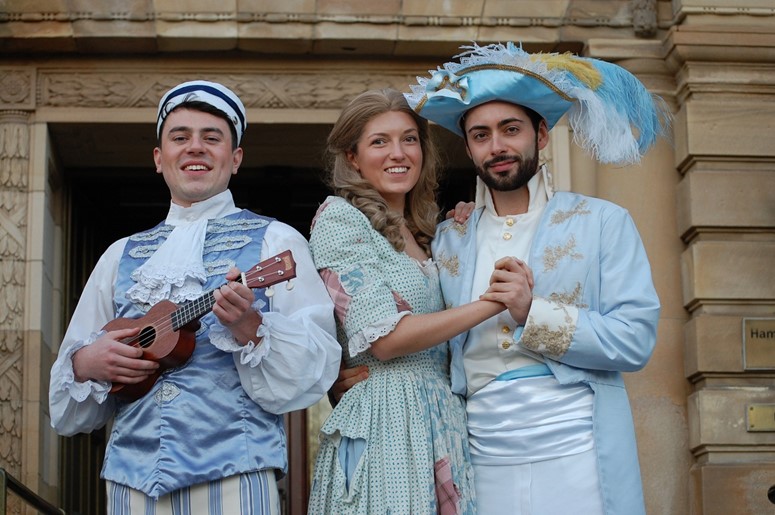 Prince Charming is played by Benjamin Storey, Buttons by Mathew Joseph-Campbell, the Wicked Stepmother by Maggie McLeod and the Ugly Sisters by Colin Jamieson and Steven Russell.

This is Steven Russell’s fourth year in the panto, having graduated in BA (Hons) Acting in 2013.

Now working as a tutor at Glasgow Acting Academy, the 25-year-old, who lives in Uddingston, said: “When I was studying I was told that I was a large actor and quite over-the-top, so panto has probably been my most consistent work as an actor since leaving College.

“I enjoy the bigger style and I really like singing and dancing, so this combines all three.”

Moreover, the band for Cinderella is comprised of Music students from New College Lanarkshire.

Producer Gillian McLaren Scott, Curriculum and Quality Leader for Performing Arts, said: “The collaborative pantomime project with South Lanarkshire Leisure & Culture gives graduates from the BA (Hons) programmes in Acting and Musical Theatre a platform to showcase their skills in what, for many of them, will be their first paid professional job.

“This exciting partnership supports our students in the difficult transition from College to the demanding and competitive work of Performing Arts.”

There are a range of matinee and evening performances and family tickets are priced from £40.

Tickets are available from: