HND students hosted a series of weekly lunchtime concerts in the main atrium of our Motherwell Campus.

The fundraisers were organised as part of a course unit in Stage Management.

Staff and students were encouraged to buy raffle tickets at the gigs, with prizes including tickets to a match at Motherwell FC, a signed football, and a tour of Fir Park stadium. 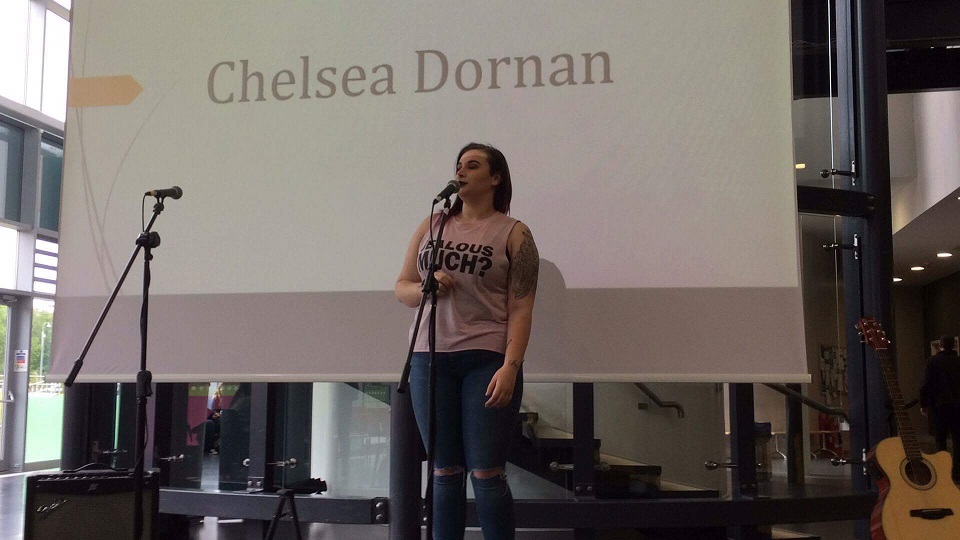 One of the organisers, Emma Louise Russell, 22, from Motherwell, said: “We thought the lunchtime gigs would be a good idea because it would entertain everyone having lunch and we could also ask for donations at the same time.

“We chose the Community Trust because they don’t just focus on football – they do so many things for the community, particularly in working with people with dementia or mental health issues.”

A group of students recently visited Fir Park to present a cheque to the Trust’s Head of Football, Jim Chapman.

Jim Chapman, who also manages Clyde FC, said: “This demonstrates the value of everyone in the community helping and supporting each other.

“It’s a fantastic gesture from the students and it will go a long way to providing opportunities and equipment for members of the community who might be less fortunate than others.”

Dawn Middleton, the Trust’s General Manager, said: “We are absolutely thrilled that the students chose our charity for their project.

“We hope that this will be the start of closer links between the College and the Club.

“The organisers have been a credit to the College in their professional approach and in their links with the Trust.”

Lecturer Scott Cowie added: “Our students not only take part in lessons relating to performance in solo and group work situations, but they also focus on classes in which they organise and promote their own events.

“The class has really demonstrated the ability to work together and further establish strong relationships within the community.

“We have already started discussing different possibilities of working with the Trust in the near future, potentially performing at open days and match days.”