Staff and students from New College Lanarkshire’s Modern Apprenticeship in Electronic Fire and Security Systems received training on a new state-of-the-art system at their specialist facilities within the Kirkintilloch Campus.

Honeywell Galaxy are market leaders and have been long-term supporters of the Modern Apprenticeship. Over the years they have donated thousands of pounds worth of intruder alarm equipment to ensure the course at New College Lanarkshire remains the best in Britain.

We also donated Galaxy panels and equipment of various descriptions that will help us train and futureproof ourselves and the upcoming engineers who are going to be installing these systems”. 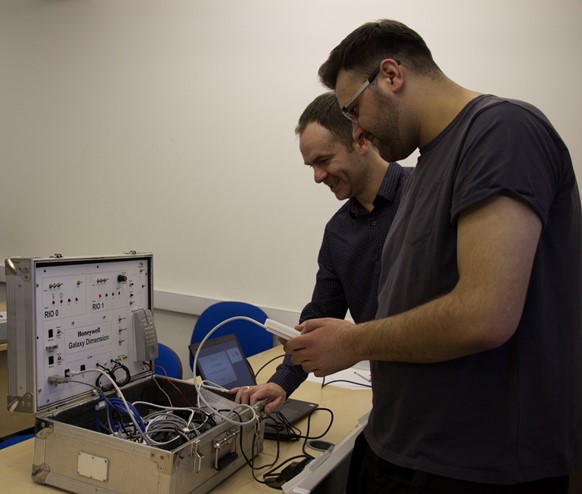 Student Lewis D’Andrea, 23, from Kilmarnock who is a Security System Engineer for Fortress Security, said:

“To have representatives from companies like Honeywell coming to speak to us it gives us more detail and knowledge about the products meaning we are much more confident if we’re out on jobs, as we can answer questions and know more about the workings of the systems.”

Compared to a lot of other courses, this course is really hands-on, we’re learning not only about the engineering side of it but also the history of the industry.”

The Kirkintilloch Campus recently had some of its existing facilities refurbished to provide a specialist hub for its Electronic Fire and Security offering, which was previously based at Motherwell.

The new facilities include a state-of-the-art workshop which hosts seven booths for up to 14 students to work with a range of equipment to enhance their skills in installing and maintaining electronic fire and security systems. Classrooms and workspaces have also been created so the facility can host up to 28 students per day.

Student Lee Scobbie, 22, from Glasgow, an engineer with ADT Fire and Security, said:

“In the work environment you don’t have time to spend on the systems and learning about them in detail, so having someone from Honeywell come in and spend time with us showcasing the equipment and explaining how it all works really boosts our knowledge and we can then pass that on to workmates and customers.”

“Employers that send apprentices onto the course at NCL really appreciate the likes of Honeywell Galaxy coming in and delivering the training as it ensures that students are being trained on the latest equipment and industry standards. The fire and security team can’t thank Honeywell Galaxy enough for their time and commitment to New College Lanarkshire.”