Our annual Awards ceremonies are a special occasion for all graduands, but they were extra special for six students who excelled in the course of their studies.

There were five winners of Ede & Ravenscroft Awards for Academic Excellence, and two winners of SQA Awards for Highest Graded Unit. 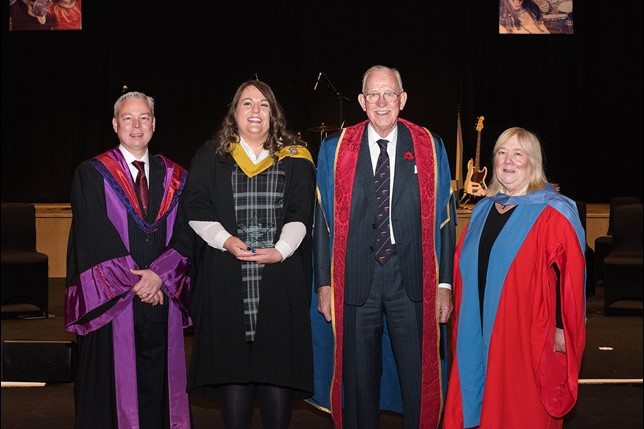 Siobhan Griffin received an Award for Academic Excellence having shone in both the theory and practical aspects of her coursework.

Siobhan, who lives in Moodiesburn, is on her way to fulfilling her dream of becoming a nurse after working for almost 12 years in Tesco, Cumbernauld.

The 28-year-old applied to study at the Cumbernauld Campus after being made redundant from her role as a team leader.

Now studying for a degree in Adult Nursing at the University of Stirling, she said: “I’m totally shocked to win the award – and I was shocked to get the marks that I did.

“I thought I would have been closer to the bottom of the class because I had been out of education for so long.”

“The submission was of such a high quality that I actually envisaged myself there.

“She is a very capable student with a caring, humble persona and will make a wonderful nurse.”

Gregory Murer’s tutors praised his strong work ethic that was reflected in his final graded unit score of 93%, which helped earn him an Award for Academic Excellence.

Originally from Strasbourg, France, the 35-year-old combined his studies with raising three young children with his Scots-born wife.

Gregory, who is now in his third year of a degree in Web and Mobile Development at the University of West of Scotland, said he was delighted to win after giving up his job in IT technical support to pursue his career goal of becoming a web developer.

He said: “I couldn’t find a job in France, so I came to Scotland on a gap year and I didn’t go back! That was about 12 years ago.

“My lecturers at New College Lanarkshire were very organised and gave us everything well in advance, so it was quite easy to plan ahead with having children.

“I’m very happy to have won an award – it’s a great thing to have when you’re looking for a job.”

Lecturer Fiona Murnin said: “Gregory can only be described as an amazingly talented, driven and hard-working person.

“As a mature student with a young family, he occasionally had to miss College due to childcare problems, but he worked extremely hard and achieved all the credits required, submitting work to an exceptional standard.” 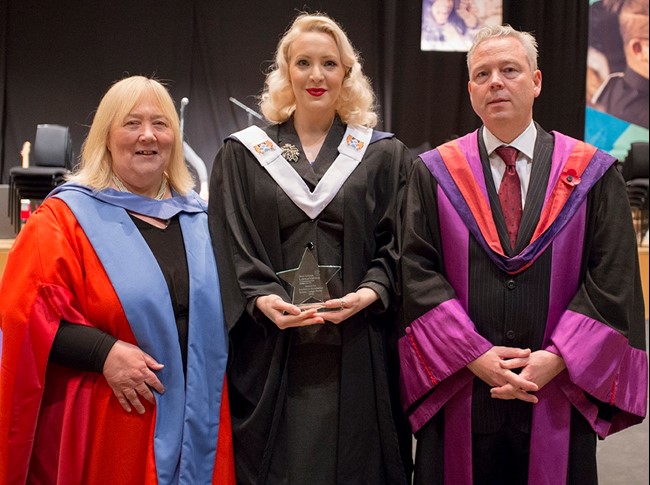 Emma Porter picked up two awards – both the SQA Award for Highest Graded Unit and the Award for Academic Excellence.

And on the morning of graduation she was on the set of Hollywood film The Wife making up its castmembers!

The 26-year-old, who lives in Glasgow’s East End, said: “It’s absolutely unbelievable. I’ve worked so, so hard this year, although so has everybody, but just to have that moment where someone says: ‘We know; we think you deserve these awards,’ makes you feel on top of the world.”

Having studied fashion and costume design to degree level through courses at Cardonald College and Glasgow Caledonian University, she believes her background in costume design and love of all things theatrical gives her a different perspective.

She said: “It’s amazing how your brain works. Because I’m trained in costume design and I have a background in theatre, you don’t just think ‘let’s paint a face and do hair’ – you have to think of the whole picture.

Emma will represent New College Lanarkshire by competing against students from all over the UK in Fashion and Photographic Make-up at the WorldSkills championships in Birmingham later this month.

Legal Services student Heather Robertson achieved a perfect score of 100% in her final assessment, which was rewarded with one of only two SQA Awards for Highest Graded Unit.

The 21-year-old from Uddingston was part of the team who worked on Project Safe, a guide to Scots Law for refugees and asylum seekers that has been translated into ten languages.

She is now in her first year of a Law degree at the University of Strathclyde.

Heather said: “I feel quite proud of myself actually because I didn’t think I would get 100% in an exam or I’d see myself at Strathclyde University if it wasn’t for New College Lanarkshire.

“I had my Post-it notes all over my room to take things in all the time – and it paid off.

“It’s a different standard of teaching and I really appreciate all the help I got.”

“Her attendance was excellent and she always ensured her homework was done to a high standard.”

Calum was nominated by his lecturers in recognition of the journey he has made as a student at New College Lanarkshire’s Motherwell Campus.

The 18-year-old from Motherwell won an Award for Academic Excellence and a cheque for £200 from sponsors Ede & Ravenscroft.

Calum first attended an engineering class at the College while a third-year pupil at Willowbank School in Coatbridge, which supports young people identified as requiring alternative educational provision.

He progressed on to study Practical Welding whilst still at school, and then in 2014 secured a place on the College’s NC Manufacturing Programme.

Gaining in confidence, he advanced to HNC Mechanical Engineering and achieved an ‘A’ grade for his final graded unit.

Moreover, Calum has become a member of the College’s team training for the WorldSkills UK Manufacturing Team Challenge.

Calum said: “I’m very proud to win because I put a lot of effort in last year and it has really paid off.

“I enjoyed the course and the lecturers were all really supportive as well. I want to carry on studying and hopefully get a degree.”

“He demonstrated high level practical skills and confidently dealt with the theoretical subjects.” 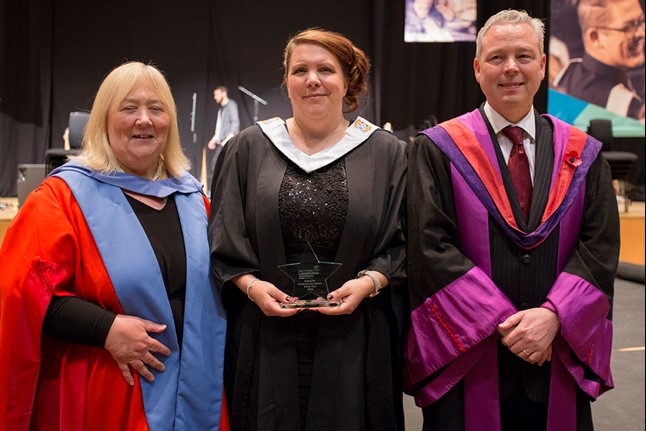 Karen Yuill was selected as the project leader of ‘Project Safe’, the high-profile commission from the Crown Office to create a guide to Scots Law for refugees and asylum seekers.

The guide received backing from First Minister Nicola Sturgeon when it was launched at a Hate Crime Conference at Hampden Park earlier this year.

Such was Karen’s commitment to the role, it earned her an Award for Academic Excellence.

The 43-year-old from Lesmahagow enrolled in the College as a mature student following 25 years working in retail.

She is now studying Law full-time at Strathclyde University and volunteers as a student advisor at the university’s Law Clinic, which offers advice to those who otherwise cannot access legal representation.

Karen said: “I’m absolutely speechless to have won an award; I just can’t believe it.

“Working on Project Safe was a marvellous opportunity, one that not many people get.

“I did some work experience in Edinburgh at the Crown Office and I was there with some Honours students from Glasgow University who couldn’t believe that college students had been asked to do that level of work.”

Karen’s lecturers described her as a great ambassador for the College who helped make the booklet, which has been translated into 10 languages, the success that it was.

Lecturer Eleanor Lafferty said: “I was impressed by Karen’s ideas and work ethic. She put in a lot of hours, sometimes emailing me back and forth at midnight with ideas and always giving me updates.

“Karen is an exceptional student who has displayed many of the attributes and qualities that prepared her well for university study.”