Four students from New College Lanarkshire have been selected for consideration to represent the UK at the world’s largest skills show, WorldSkills Abu Dhabi 2017.

The four form part of the College’s overall medal winners at WorldSkillsUK, where six students were medalled and seven were highly commended – making New College Lanarkshire the third best performing institution at the competition.

Kyle Closs, 20, from Bellshill, won gold in IT Software Solutions for Business, while Annie Walters, 29, from Coatbridge, also took home gold for her performance in Media Make-up – Face. 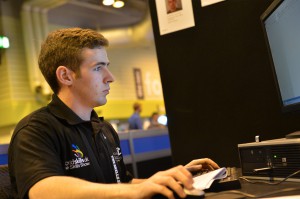 There was great success in Mechanical Engineering: CAD where Betsy Crosbie, 19, from East Kilbride, was awarded silver while Calum Waltho, 20, from Carluke, won bronze for his performance. Christopher Hugh Reid, 20, from Glasgow also received a highly commended award. All three will be considered to represent Team UK at WorldSkills Abu Dhabi 2017.

Jonathan Samson, 18, from Motherwell, will also be considered, after being awarded silver for his performance in the Network Infrastructure Technician category.

The sixth medal was awarded to Stuart Livingston, 24, from Cumbernauld, who achieved bronze in the Network Systems Administrator category. 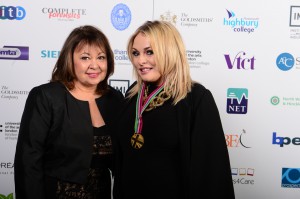 “With six medallists and seven highly commended, the students’ hard work and determination has paid off, and everyone at the College is delighted for them.

“Having four of our students being considered for Team UK is a fantastic accolade for the entire college and strengthens our commitment to providing the best possible provision for skills development.

“On behalf of the College, I would like to congratulate all of our students who took part in the competition and reaffirmed our position as one of the top institutions in the UK.”

Peter Launer, chief executive of the Skills Funding Agency and the Education Funding Agency, said: “As the UK’s official delegate for WorldSkills competitions I know I’ve seen young people with the potential to succeed in the heat of international competition, when the next WorldSkills event is held in Abu Dhabi in 2017.

“Every competitor I’ve seen this week in Birmingham knows that they have the skills which will give them a good career.

“They will create wealth and prosperity for themselves and their families and their communities, all because of their skills.”

The Skills Show is the nation’s largest skills and careers event and helps to shape the future of a new generation. Attracting over 75,000 visitors annually, the show provides hands-on experiences that inspire young people to explore careers and motivates them to find out more about the world of work.

Carole Stott, Chair of Find a Future, which manages the WorldSkills UK Skills Competitions said: “The Skills Show has been a great success in inspiring young people to explore different careers.

“By enabling them to watch the UK’s most talented competing in the WorldSkills UK Skills Competition and providing hands-on career experiences, we are able to provide them with the chance to unlock their potential and get excited about the world of work.”

Ex-Dragon’s Den star and entrepreneur Theo Paphitis, who patrons the Skills Show also sent a message of congratulations to the participants, saying: “The Skills Show provides a wonderful opportunity for young people to get face to face career advice, and also to literally ‘have a go’ and learn new skills.” o