Boyd Tunnock has launched the region’s first Big Bang Fair at New College Lanarkshire in the company of hundreds of school pupils.

The head of famed Uddingston-based confectioners Tunnock’s, who was made a fellow of the College in 2016, visited the Motherwell Campus for the start of the two-day event.

The Big Bang Fair is an action-packed showcase of STEM (Science, Technology, Engineering and Maths) subjects that allows pupils to try out new skills in a fun learning environment.

Organised by Developing the Young Workforce (DYW) and ESP, it aims to inspire young people to pursue a career in STEM-related roles through engaging with exciting interactive activities and speaking with employers.

The pupils were split into groups named after famous Scots inventors and scientists before being chaperoned around the campuses by student volunteers.

The first day at the College’s Motherwell Campus involved more than 140 pupils in S1 and S2 having a go at science and technology-related tasks and meeting local employers. 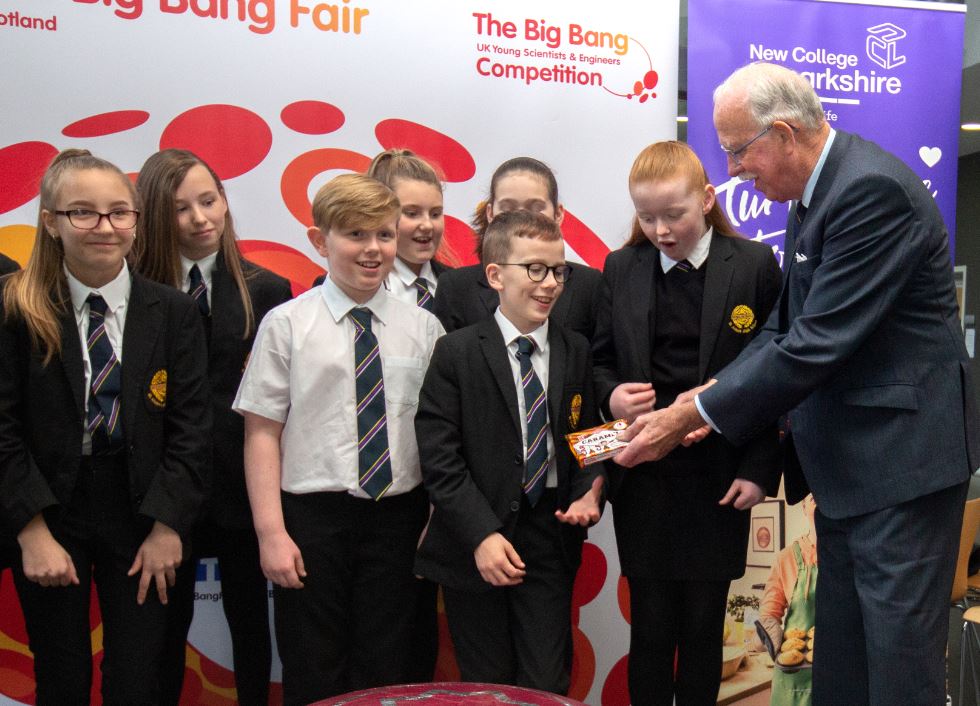 Lennon McAvoy, 12, from Wishaw, was singled out by Mr Tunnock, who presented him with a pack of Caramel Wafers.

Pupils were able to try their hands at activities such as digital animation, programming robots, songwriting, a security systems escape challenge, and changing the wheels of a college-branded Knockhill racecar.

The schools in attendance at the Coatbridge Campus were: Boclair Academy in Bearsden, Douglas Academy in Milngavie, Kirkintilloch High School, Chryston High in Glasgow, Coatbridge High, Airdrie Academy, St Ambrose in Coatbridge, St Margaret’s in Airdrie, Our Lady’s High and St Maurice’s, both in Cumbernauld.

The Coatbridge Campus event saw pupils visit the high-tech Dental and Science facilities, learn about recording techniques in the sound studios, get to grips with Lego robots and try out a Microbit fitness tracker.

Employers who participated in the events included the Royal Air Force, University of the West of Scotland, Di Maggio’s, CITB (Construction Industry Training Board), ICE (Institution of Civil Engineers), NHS Lanarkshire and Dawnfresh. 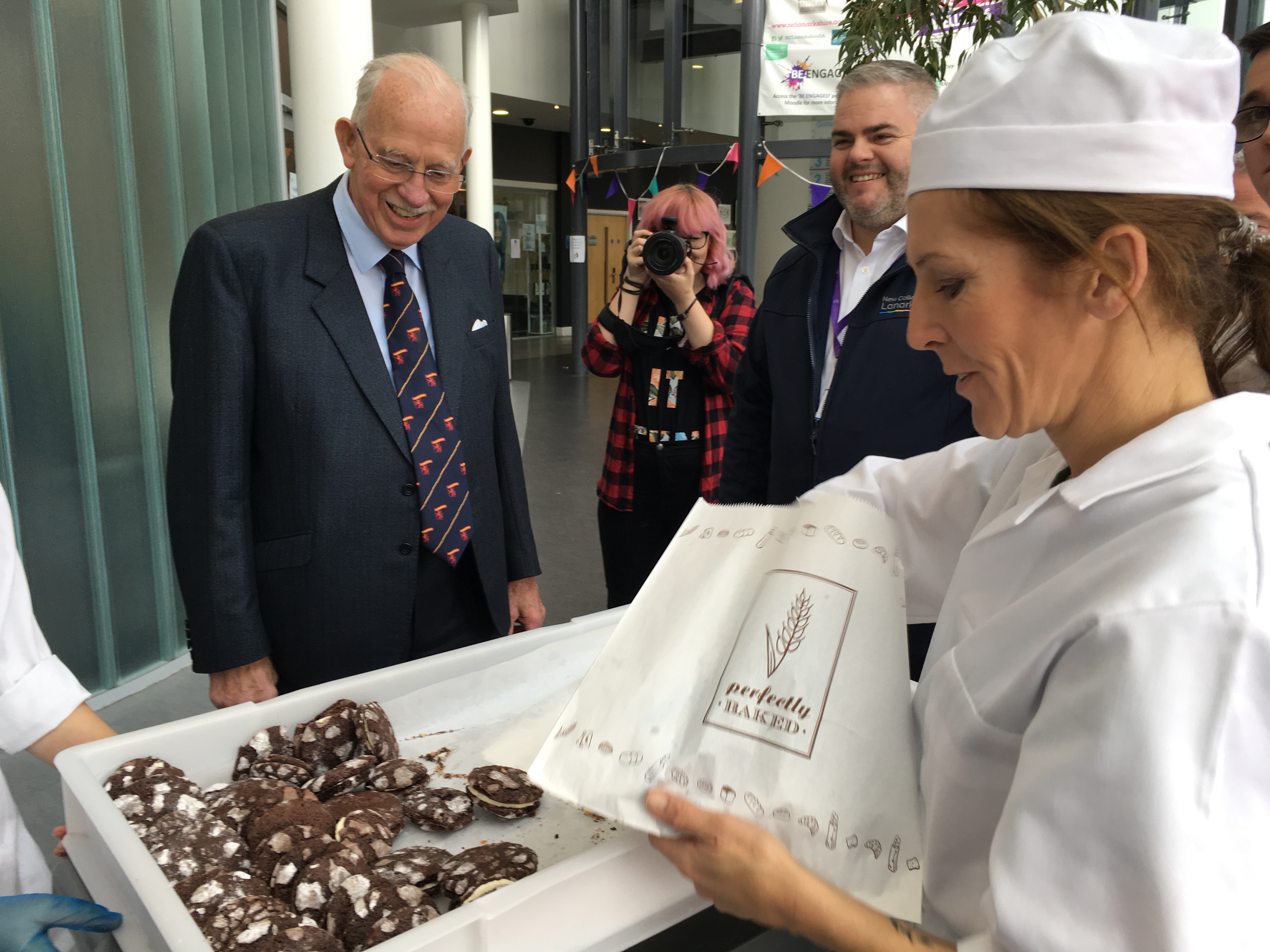 Each Big Bang event was rounded off with a thank you to all those who attended and pupils leaving with goodie bags that included a sweet treat from Tunnock’s.

Mr Tunnock, who famously invented the Tunnock’s Teacake, said: “First and second year at school is the best stage to interest young people and show them what they can do; anything from becoming a motorcycle mechanic to a baker. You’ve got so much to choose from here at the College.

“Technology is very important to us at Tunnock’s – we’re continually training people and bringing in modern equipment to improve our business.

“It’s super to be asked to come to the College today. When I think back to the highlights of my career, getting a standing ovation from all the students at Graduation at the Royal Concert Hall two years ago was absolutely wonderful. It was such a lift for me.”

Alison Nimmo, Programme Manager of DYW, said: “Big Bang is a UK-wide initiative which is promoted across Scotland.

“This is the first Big Bang STEM inspiration event brought to Lanarkshire in collaboration with DYW, ESP and the College.

“It presents a fantastic opportunity for our young people to gain an inspirational insight into a wide range of interactive STEM-related activities and related careers.” 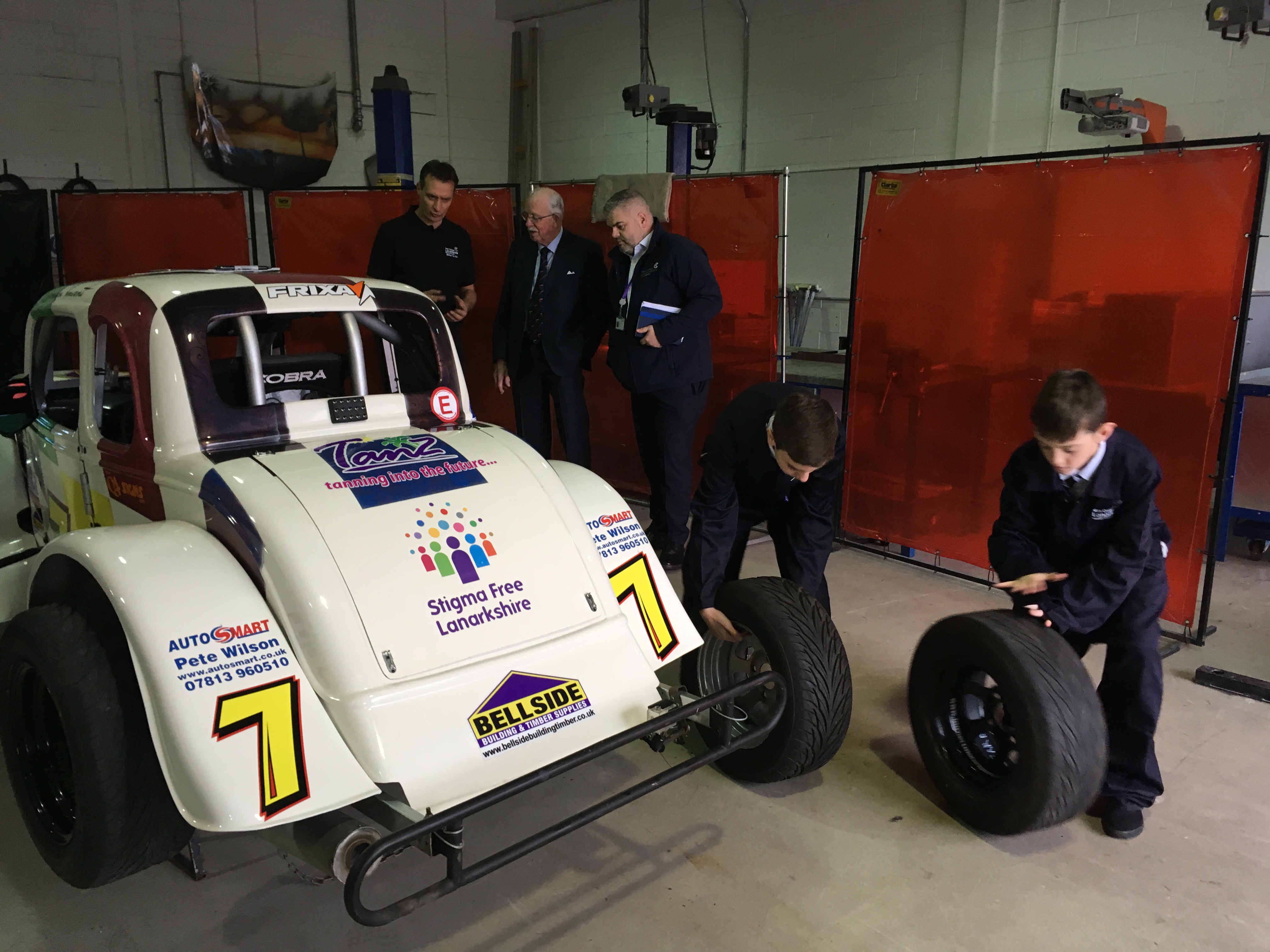 Wendy Findlay, Employer Support Manager of ESP, said: “ESP supports Big Bang events all over Scotland providing outreach to schools from as far afield as Skye, Dumfries and Galloway and the Scottish Borders.

“These STEM events are supported by Scotland’s colleges and an ever-increasing number of education and industry partners.

“They aim to inspire young people to continue with their studies in science, maths and technical studies by providing hands-on interactive activities which widen their understanding of how STEM subjects are relevant to potential future careers.”

“STEM subjects are important to the College and vital to the future of our economy.

“This event allows S1 and S2 school pupils to gain an insight into the breadth of STEM subjects offered by the College and available to them, as an option for further study, once they leave school.

“We hope all the pupils have enjoyed the range of activities available to try over the two days.”