The Glasgow-based actor, who founded international relief charity Spirit Aid in 2001, took part in a question and answer session with Performing Arts students at our Coatbridge Campus.

Having found acclaim with his portrayal of Jimmy Boyle in A Sense of Freedom in 1979, he has scores of film and TV credits to his name, recently starring alongside Timothy Spall in ITV heist mini-series Hatton Garden and in BBC’s dark drama Taboo alongside Tom Hardy.

His visit was part of the College’s partnership with Shooters, the film-making branch of Spirit Aid, which aims to give young people a voice through film.

The team from Shooters spent five days working with 18 students of the BA Acting programme on a training workshop to teach the skills involved in working for television and film.

Students were able to learn more about talking through scripts, acting technique and slow walks. 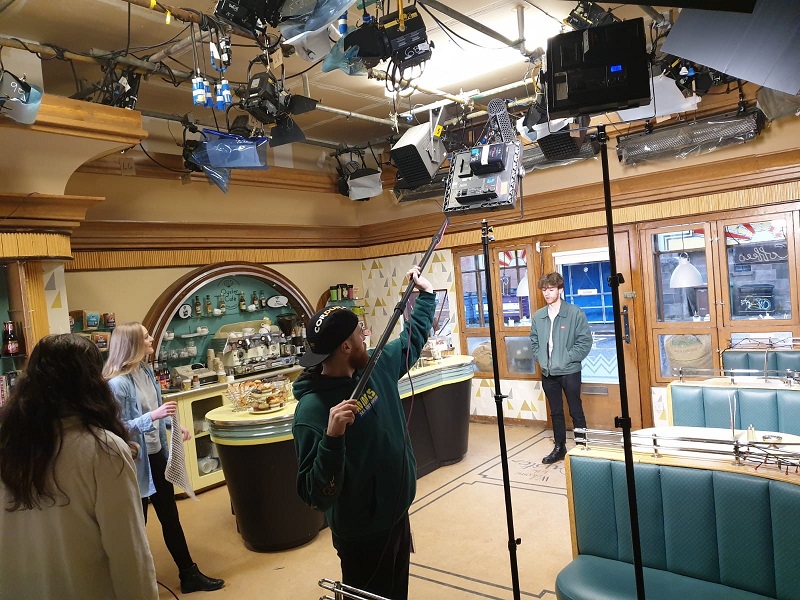 They travelled to the River City studios in Dumbarton where they gained hands-on experience in the equipment and logistics involved in filming, and where they also met Keira Lucchesi, who plays Stella Walker in the BBC Scotland series.

Shooters is led by director and filmmaker Moe Abutoq, producer and director David Hayman Jnr, and cameraman and director of photography Fraz Raheem.

David Hayman Jnr said: “The Acting for Camera training we provide as part of the BA Acting course at New College Lanarkshire is always an enjoyable experience.

“In the current climate, it is extremely important to learn these skills and the students were very  receptive; taking direction well and also adapting to different roles within an 'on set' environment.

“Their commitment was second-to-none and it was wonderful to see their growth in confidence, skills and their enjoyment of the experience as a whole.

“We hope that this gives them a solid foundation for future work in the film and television industry.

“All of the staff are always very accommodating and deserve an enormous amount of credit.

“The hard work and encouragement they give their students is evident in the success stories of their graduates.”

Gregor Duncan, Curriculum and Quality Leader for Performing Arts, said: “The dedication, expertise and level of work from the Shooters team is always exceptional and makes this unique opportunity for students invaluable.

“Getting to work so closely with a team connected to the profession is hugely beneficial to the students’ training.

“It’s wonderful watching our students grow with confidence over the week and the standard of work they produce is fantastic.

“This year, getting the chance to film on the BBC River City set was really exciting and allowed the students to experience a true working environment – it’s an opportunity that precious few students will have.

“We look forward to continuing working closely with Shooters and building on the fantastic work that has been produced.”

Spirit Aid, which is dedicated to alleviating the suffering of young people affected by poverty, neglect, abuse, lack of opportunity, humanitarian crisis or war, currently has operations running in Scotland, Palestine, Afghanistan and Malawi.

Since its inception in 2002, the Shooters project has produced more than 80 films, highlighting a range of issues such as mental health, addiction, bullying and domestic abuse.

Meanwhile, David Hayman was recently named in the shortlist for the annual Robert Burns Humanitarian Award (RBHA), which will be announced at Burns Cottage on January 22nd.

To find out more about the work of Spirit Aid, please visit https://spiritaid.org/