Two HND Music students from New College Lanarkshire feature on a new album from music legends, Hue & Cry. Rebeka O’Rorke from Wishaw and Regan Talbot from Glenboig feature as backing vocalists on Pocketful Of Stones’, which was released on 1 September.

The pair, who have just started the HND Music course following completion of the HNC, joined their lecturer Yvonne Tipping and vocalist Ryan J Burns on eight tracks of the upcoming record.

"I couldn’t believe it when I was selected to provide backing vocals for Hue and Cry – I was so excited to get into the studio with them and be part of something massive.

It was really nerve-racking as there was a lot of pressure. This wasn’t just a project for college or a gig in front of friends, this was working with professional musicians and legends!

It is a really big deal for me and I am really proud to have been chosen. I know that it will be really beneficial for me in my future career.”

“This wasn’t the first time I’ve been in a professional studio, but it was the first time I’ve recorded anything so big or worthwhile! It was really overwhelming to be singing alongside Hue and Cry and something that will stay with me throughout my whole career.

The opportunities you get at college really are incredible. If it hadn’t been for Yvonne’s connections in the industry, we would never have had this chance. All our lecturers are really connected and it’s what makes the course so great. I can’t wait to see where it takes me in the future.” 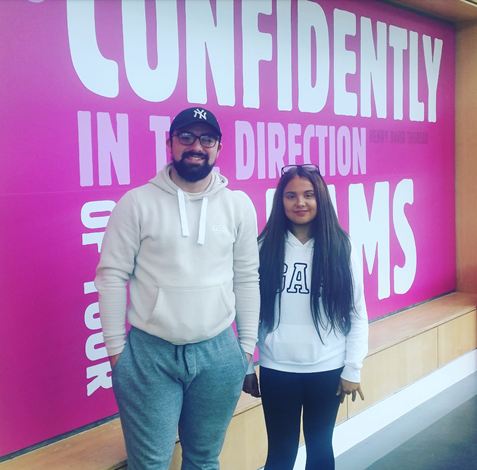 Their vocal skills were called upon by the iconic brothers after lecturer Yvonne, also known in the industry as Tippi, recommended them for the job after working as a backing vocalist with Hue and Cry for the past seven years. She said:

“Having witnessed Rebeka and Regan’s ability to work with complex vocal harmonies coupled with the tone of their voices, I brought them to the attention of Greg Kane of Hue and Cry.

Despite the high pressured situation of recording in a professional environment, they both performed excellently and they were a real credit to the College – showing that their studies on the music course has made them industry-ready.”

Not the first time Hue and Cry have been associated with the Faculty of Creative Industries at New College Lanarkshire, Greg has previously guest lectured for music students, sharing his in-depth knowledge and experiences of the industry.

Having seen the talent and commitment on offer by the students at the College and the level of expert tuition given by lecturers, all of whom are also in the industry, Greg was keen to give the students a chance at live studio recording. He said:

“Backing vocal studio sessions on Hue and Cry album recordings are always very demanding of everyone involved, we all need to be on top of our game for them to be successful. I like to put all the singers around one microphone when recording backing vocals. This technique will always produce the best results, as long as all the singers are capable, consistent and communicative.

Rebeka and Regan were asked to sing on our record because of their ability as singers. But very early on in the sessions I realised that they also possessed the necessary mind-set required to excel in this highly demanding environment.

I found them to be professional beyond their years and they brought a youthful enthusiasm to the sessions that the record really benefited from. I will definitely use them again and again.”

New College Lanarkshire offers a range of music and music business courses. For more information click the link below: