Students turn out in record numbers to elect new leaders

The New College Lanarkshire Students’ Association (NCLSA) have elected their new President and Vice President for 2016-17 at their annual student elections. 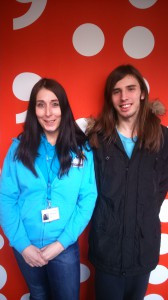 Zorena Shanks, the current Vice President, has been elected to the role of President. She studies NQ Counselling Skills.

Both live in Cumbernauld.

The election recorded the highest turnout in NCLSA election with a dramatic 580% increase in voters. Three candidates contested the position of President, and seven candidates ran for Vice President.

The candidates shall take up their new roles on 1 July 2016.

“I am absolutely delighted to have been elected as the new NCLSA President. This was an amazing election to have been a part of, and the support and positive conversations I had from students while campaigning was very inspiring. It was fabulous to see the engagement and motivation from the students at this year’s elections.

“With our new Vice President, I will continue to work alongside the National Union of Students Scotland on the many barriers to education that students face to ensure each and every student has the very best learner experience while studying at NCL. I am committed to ensuring that the voice of students at New College Lanarkshire will be heard.

“I am looking forward to working in partnership with the NCL Learner Engagement team and student advisors to improve and enhance the students’ leaning experience.

“I am excited to start my term, for what should be a really exciting year and to bring about positive change for all College students.”

“The results came as a shock as it was hard to tell what the result of the election would be. I never expected to win, however I found a lot of motivation that I never thought I had while out campaigning.

“I will use my year in office to ensure more students than ever are involved in the Students’ Association. On the campaign trail, students spoke to me about a range of different issues, from student finances to services such as social areas, the canteen and the availability of events and clubs. It is also clear that the Students’ Association must do more for those students in smaller campuses. I hope to empower students to make a difference in these areas.

“I have never achieved anything so big in my life before and I hope to represent the students of New College Lanarkshire with pride and dignity.”

“I am delighted that we have posted a record turnout in our elections. To get over five times the turnout of last year’s election is testament to the work we have done to review why students vote in elections and to make them more accessible and relevant to students.

“I am sure Daniel and Zorena will endeavour to ensure that more students engage with the Students’ Association to bring about positive change to the learning experience at New College Lanarkshire, and I wish them good luck for the year ahead.”