A walking initiative originated by students and staff of New College Lanarkshire has been praised in a Scottish Parliament debate.

Walk This Way was launched at our Coatbridge Campus in September with a series of routes to walk around nearby Dunbeth Park.

After attending its launch, Fulton MacGregor, MSP for Coatbridge and Chryston, lodged a motion in the Scottish Parliament to support the project.

Fulton MacGregor MSP said: “I would like to congratulate staff and students at the Coatbridge Campus of New College Lanarkshire on their Walk This Way walking routes project in Dunbeth Park.

“I hope that the creation of the paths will encourage even more people in Coatbridge and the wider community to enjoy the park.

“The positive impact that walking can have on health – both physical and mental – is undeniable.”

Students’ Association President Zorena Shanks, Vice-President Daniel Moore and Volunteer Officer Thomas Bellard were among those who watched the discussion at Holyrood.

Zorena Shanks said: “We felt extremely proud to be sitting in the chamber and watching the live debate.

“It was amazing to hear New College Lanarkshire being highly commended by Mr MacGregor and the many other MSPs during the debate.

“The Students’ Association is continuing to support Walk This Way as walking has so many benefits.”

The health and wellbeing project involved a number of different groups across the College. 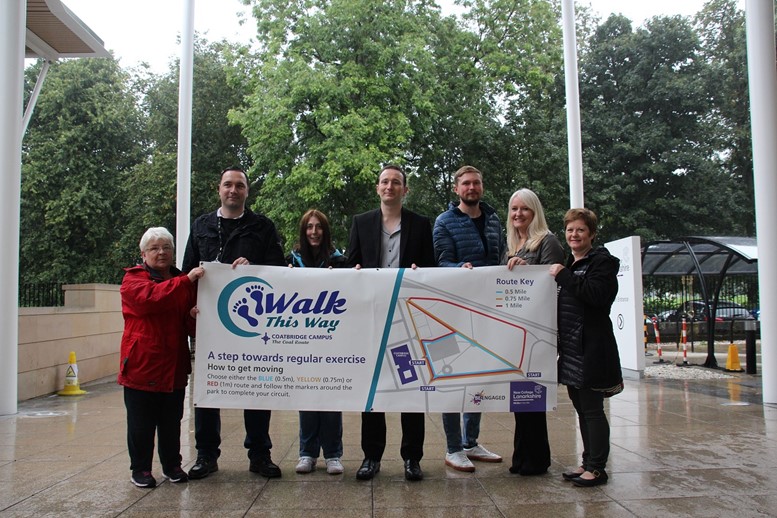 These were painted onto the paths around the park to denote three different distances: a red, one-mile walk, a yellow, ¾-mile route and a blue ½-mile walk.

Students and visitors can book out pedometers from Coatbridge Campus reception to record their steps.

The Dunbeth Park pilot is the first of three in the initiative, with plans to create similar walking routes around our Cumbernauld and Motherwell campuses.

Learner Engagement Officer Ross Brand said: “The Parliamentary debate gave the initiative more credibility and could help to raise its profile in the wider community and perhaps open up additional partnership opportunities with like-minded organisations.

“I have heard that many staff at Coatbridge Campus have integrated it into their daily routine and students have informed me of their experience following the routes in order to receive one of our ‘Be Engaged’ awards for participating.

“We hope to continue to raise the profile of this particular initiative, both internally and externally, with the assistance of partnerships.”