Qualifiers have been held across the UK to decide the eight students and apprentices from each skills area who will represent their college or organisation at WorldSkills UK LIVE in Birmingham in November.

A huge congratulations to everyone who is taking part – and we’ll find out in two months’ time the lucky students and apprentices who will be competing in the finals at the NEC.

There were only two students representing Scotland to compete in WorldSkills UK’s Laboratory Technician category earlier this month – and both hailed from NCL!

The North of England regional qualifier saw our students testing their skills alongside budding lab technicians from the University of Manchester and University of Nottingham, with NCL’s very own Lewis Dymock finishing in first-place in the heat.

For the first time, Sports students from New College Lanarkshire have competed in the WorldSkills UK Fitness Trainer contest – and the College was proud to welcome students from City of Glasgow College, Belfast Met and North West Regional College in Northern Ireland to the Motherwell Campus for the qualifier.

Each student had to put their client through a personal training session lasting 45 minutes, which was overseen by a panel of nine judges.

The competition was organised by AoC Sport and students were expected to show skills in helping their clients reach personal health and fitness goals.

The Coatbridge Campus became the focal point for the WorldSkills UK qualifiers for Scotland’s next generation of beauty therapists, hairdressers and make-up artists.

There were no fewer than five WorldSkills trade disciplines in the spotlight in Coatbridge, with students competing in qualifiers for Hairdressing, Commercial Make-up, Nail Technician, Beauty Therapy: Body, and Creative Media Make-up.

Skillweld is the UK's most prestigious welder competition – and the finals are held every year at the WorldSkills UK LIVE show event in Birmingham.

They had only four hours to complete the test joints in all welding processes.

The event was attended by Chris Eady from TWI (The Welding Institute), Stephen Haymes from Skillweld, plus representatives from Air Products and Code A Weld.

The Motherwell Campus became the focus of the BIM and Mechanical Engineering: CAD qualifiers.

The Mechanical Engineering: CAD category is always one-to-watch, with previous NCL students going on to represent Team UK in both EuroSkills and the global WorldSkills competitions.

In the BIM qualifier, the top 10 BIM students in Scotland were vying to impress in the Scottish regional BIM competition, testing their collaborative design skills using packages such as Autodesk Revit and BIM360. After the success of the demonstration competition last year at Birmingham’s NEC, the skills test is now part of the official competition for 2019.

The 10 competitors were all students from the Computer Aided Architectural Design and Technology course delivered at Motherwell Campus, which is leading BIM delivery for architectural design in education.

The College’s IT crowd had a busy week of competitions in June with our students testing their skills in qualifiers held at our Motherwell Campus, Edinburgh College’s Sighthill Campus and at the Cardonald Campus of Glasgow Clyde College.

In the IT Support Technician qualifier in Motherwell, students from NCL gained the top three spots with a first place finish for Chris Smith, second for Philip Kennedy and third for Francis Morris.

In the Network Infrastructure Technician qualifier in Motherwell, Fraser Campbell finished first and there was a third-place finish for Samuel Glendinning.

Six NCL students looking to forge a career in Construction Metalwork tested their skills at this qualifier at the Motherwell Campus.

Trade organisation Semta oversaw the skills tests which involved building a windmill out of various types of steel materials. Students had to demonstrate mig welding, plasma cutting, oxy-fuel cutting and drilling, as well as interpreting drawings and marking off material.

Three students from New College Lanarkshire tested their skills against students and apprentices from across Scotland in this qualifier at City of Glasgow College.

The Construction Industry Training Board (CITB) is the competition organising partner for these skills areas.

Organised by The Institute of the Motor Industry (IMI) in conjunction with WorldSkills UK, the Auto Skills Scotland event tasked hopefuls with completing a series of 30-minute practical and theoretical tests including welding, panel repair, panel alignment and MET (mechanical, electrical and trim).

On the day, New College Lanarkshire student Karol Beczek finished as runner-up, whilst Samuel Meheux of GTG Training was named the winner. Both will be invited to go forward to the next stage of the competition. 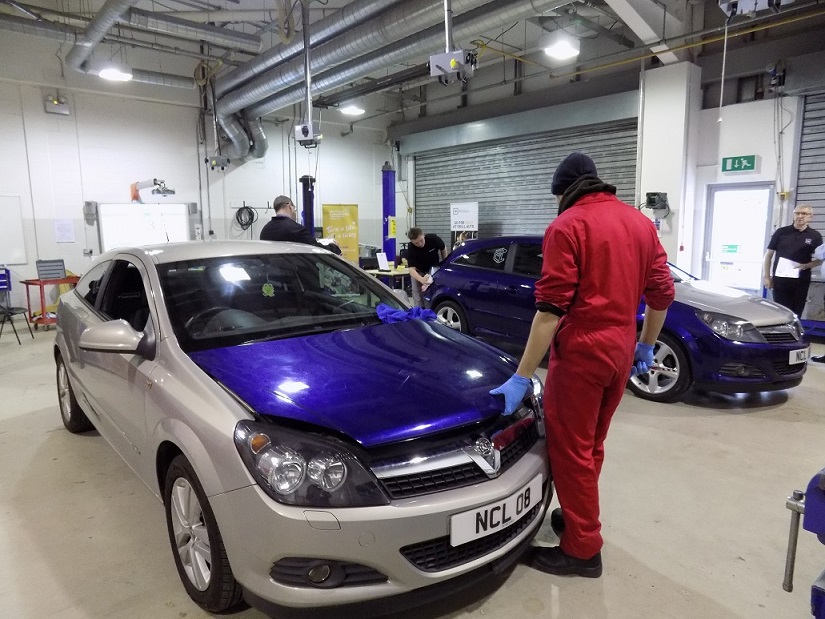 Modern Apprentices in Electronic Fire & Security showcased their skills in a three-day challenge at the specialist hub in Kirkintilloch in March. The winners were Lee Scobbie, Ryan Gibb, Michael Battersby and Stephen Grey.

Some of the top performing apprentices will be selected to travel to WorldSkills UK Live in Birmingham in November to take part in the first-ever Security Technician demonstration competition.