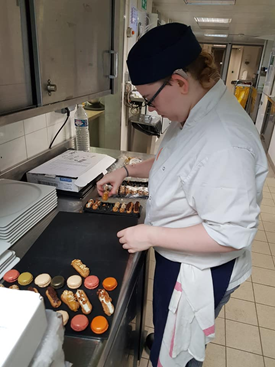 "I had never been abroad before, never been on a plane, so naturally I was quite nervous on our way to the airport, however once the plane took off and we got above the clouds I really settled down and quite enjoyed the flight. Our landing in Geneva was very exciting as we had to abort at the last minute and we took off again very fast. Flying at a steep tangent, high into the sky. All because another plane was too slow clearing the runway.

"I did all my work experience at Le Garage restaurant, 67 Avenue Maréchal de Saxe, 69003 Lyon, France. Again I was apprehensive because of the language and the cultural differences and also because I am Deaf and work with a Communication Support Worker (CSW). I completed my experience with 2 CSWs from my college. The staff at Le Garage were very friendly and helpful. They realised almost immediately that the best way to explain a task to me was to demonstrate as I am obviously a visual learner. I had a really close bond with Stephanie, a lovely French chef who showed me nothing but kindness and patience. I honestly think she is the nicest person I have ever met.  While working in the restaurant I did a lot of prep work but I also had the opportunity to make things like blue macarons and I was able to work on my food presentation and knife skills. 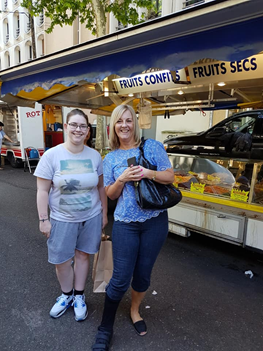 "Along with the group we visited a lot of interesting places like Montluc prison. Montluc was used by the Germans in the Second World War and Klaus Barbie was the man in charge at that time. After the war he was caught and sentenced and he was brought back to Montluc to spend a token week in the prison he was once in charge of. We also went on a boat trip down the rivers Rhone and Saone. We visited Parc de la Tete d’Or which is a huge park with a lake and a zoo and the best part is that it was free. I went to the Museum of Miniature and Cinema and my favourite thing there was a giant alien which moved.

"Sometimes we cooked our own food, sometimes we went for a burger but we also went to some really nice restaurants like the Paul Bocuse restaurant called 'Le Nord'. It is the most beautiful place, very posh and very, very French. The food was fantastic and tasted really different to the food we have in Scotland. I started with Saucisson Chaud Pistaché en Brioche and it was so tasty, then I had fish followed by the best strawberry tart ever. I also liked a small restaurant called 'Le Comptoir des Marronniers'. I had a lovely meal there, too – salad Lyonaise, followed by chicken with rice and raspberry jus, followed by ice-cream. I like my food.

"Overall it was a brilliant experience. At the start of my work experience I was very worried about the communication – I quickly became more independent and would charge off to ask Stephanie for my next job without my CSW."