Three students on the same course at our Broadwood Campus are achieving their goal of combining studying with playing professional-level football.

Alloa Athletic FC players Andrew Wilson and Calum Waters, and Clyde FC’s Mark McMillan, are all students of HNC Coaching and Developing Sport at our specialist sports campus in Cumbernauld.

They study three full days a week at college in addition to turning out for their clubs at the weekends.

The trio acknowledge that gaining a coaching qualification will bolster their existing football knowledge and skills as well as opening a career path for the future. 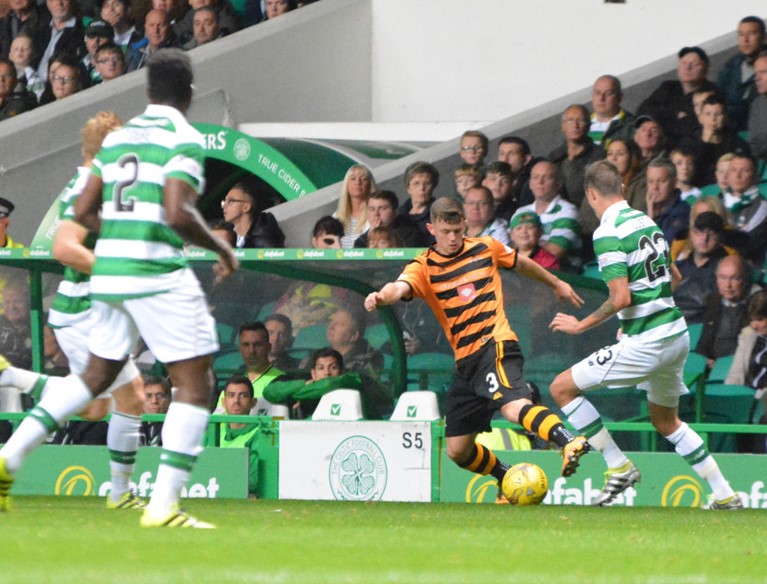 The 21-year-old left back, who lives in Kilsyth, has also represented Scotland at youth level.

Calum made the decision to apply to study at New College Lanarkshire after going part-time as a player.

He said: “It’s been great – I’ve been really busy and thrown myself into it.

“I train with Alloa two nights a week on Tuesdays and Thursdays, and we’ll have a game on a Saturday and sometimes a midweek game, too.

“The combination of playing and studying has been great, because the timings don’t really clash.

“The three of us have always helped each other with the work, because it can be quite a heavy load at times. 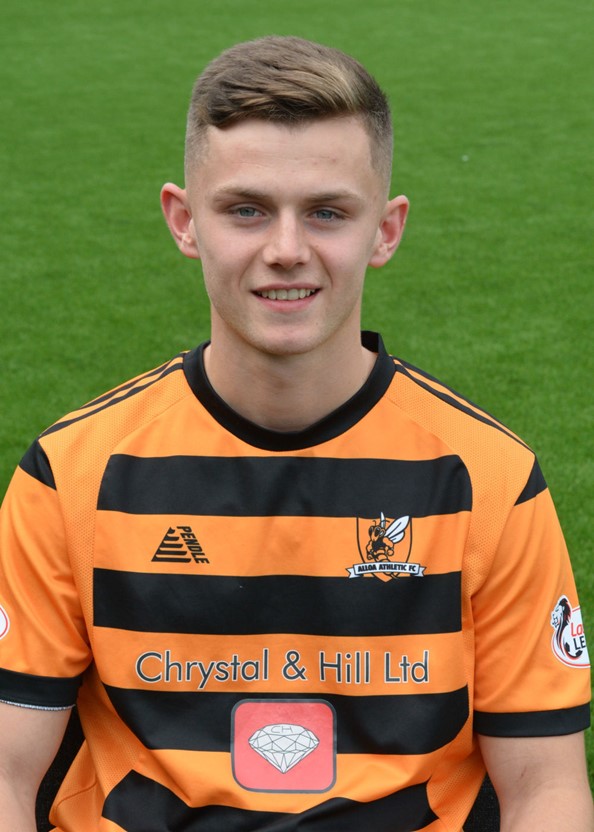 “And when we’re doing practical work, it’s always good to have people who are at a similar age and a similar ability so that you can have a good game of football. It’s always quite competitive!”

Alloa are currently sitting second in Scottish League One.

Calum, who has taught pupils of St Patrick’s Primary in Kilsyth on his work placement, added: “We’re doing really well. We’re second just now but I don’t think we’ve got a chance of catching Livingston, so I think it’s looking like the play-offs for us this season.

“It was good to be signed by Alloa – I’m at a stage in my career where I just want to get games and I’ve played every week since being at Alloa, so I’m really thankful for that.”

Calum’s team-mate, goalkeeper Andrew Wilson, signed his first professional contract during the 2015/16 season at the age of 16.

He applied to study at New College Lanarkshire on the recommendation of Alloa youth coach Graeme Liveston. 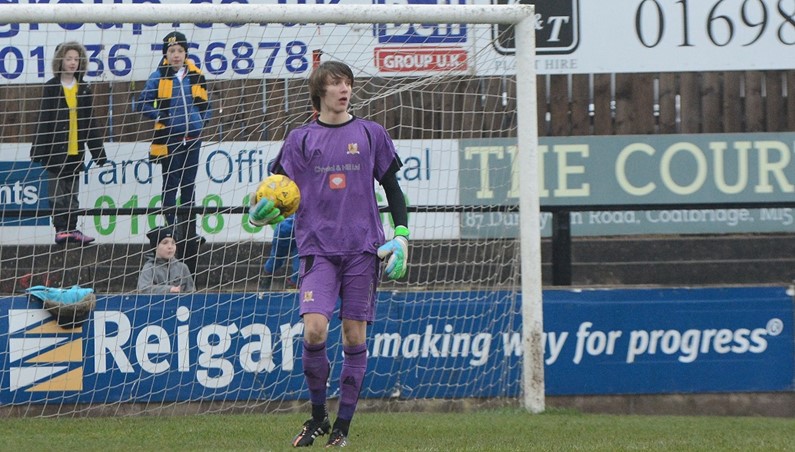 The 18-year-old travels from his home in Bathgate to Broadwood three days a week to complete his course work and a work placement at St Flannan’s in Kirkintilloch.

Andrew said: “It’s been brilliant. The boys on my course have been brilliant, the facilities, the pitch and the staff – you can’t argue with all those things.

“A lot of footballers go on to do coaching at the end of their career, but to have this qualification, and hopefully the HND after this, puts you ahead of other people who want to do the same thing.

“I wouldn’t say it’s easy, because the first half of the year especially was a lot of work, but to have some free time on a Wednesday and Friday really helped.

“And the teaching staff have been brilliant – you get a good laugh with them as well.” 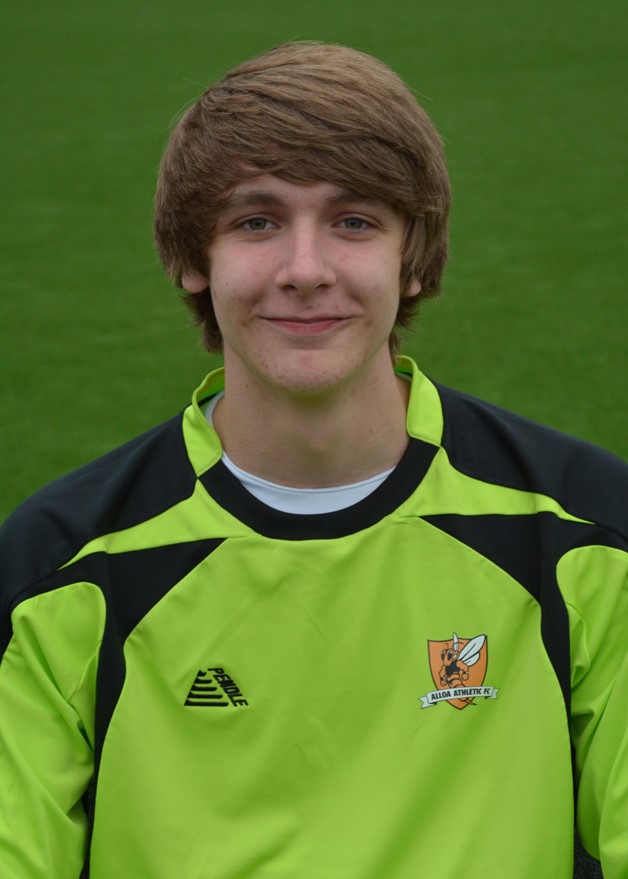 Andrew is currently Alloa’s second-choice goalkeeper and made his first-team debut recently against Albion Rovers, in a game that ended 1-1.

Clyde FC goalkeeper Mark McMillan made his debut against Cowdenbeath recently having progressed through the ranks of the club’s youth teams.

The 18-year-old, who lives in Bishopbriggs, is following in the footsteps of his father who also studied the same course at New College Lanarkshire.

Mark said: “My dad played at junior level but didn’t play professionally, and he had some really good things to say about the course and the facilities here.

“It’s been really good for me because Clyde are based at Broadwood Stadium, so it’s ideal for travelling.

“The two days off are brilliant so you can catch up on any spare work, and the staff have been really good at letting us come in to use the facilities on our days off.”

Mark added: “We’re down the bottom end of the table, so every game we’re playing is a big game at the moment to try to lift us out of the relegation fight.

“My debut was quite nerve-wracking. It was something completely different but it was a really enjoyable experience and something that I learned a lot from.

“Broadwood a good place to play your football – it’s a nice pitch and it’s good to play in a stadium of this size.” 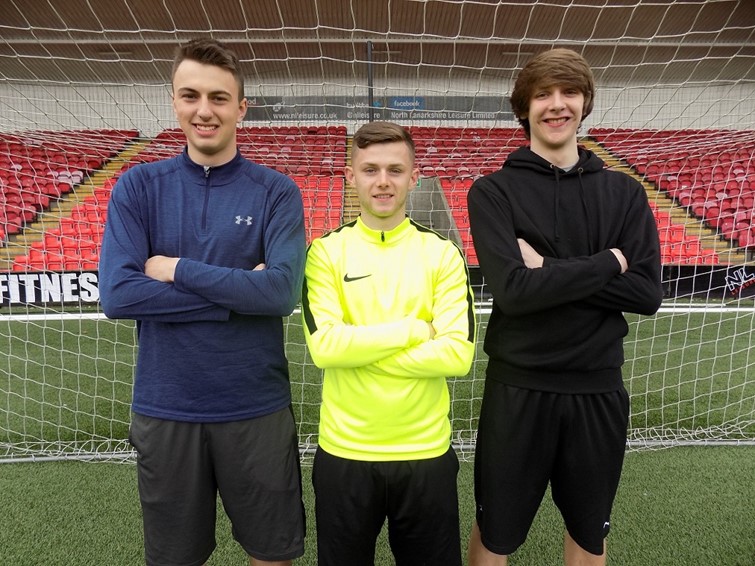 Mark, Calum and Andrew all plan to progress to study HND Coaching and Developing Sport.

Curriculum and Quality Leader Todd Lumsden said: “The boys have entered education and grasped the chance to continue playing part-time while furthering their education and qualification level.

“They are also widening their opportunities for employment as they put the theories of coaching into practice with the professional football knowledge they have so far.”

Applications are now open for Sports courses at our Motherwell and Broadwood campuses.