Final preparations for Betsy ahead of WorldSkills Abu Dhabi

New College Lanarkshire student and WorldSkills UK champion Betsy Crosbie is in the final stages of preparation ahead of competing in the world’s largest skills competition.

Betsy Crosbie, 21 from East Kilbride will compete against the best students and apprentices of Mechanical Engineering: Computer Aided Design (CAD) from across the world at the WorldSkills Final in Abu Dhabi from 14 – 19 October.

Having already competed and succeeded in WorldSkills UK 2016 and EuroSkills Gothenburgh 2016, Betsy has already proven herself as a leader in the skill – but will now be competing with the world’s best in the industry to achieve global recognition.

Competing against 24 other competitors from Spain to Switzerland, Kazakhstan to Korea, Betsy is one of only two females in the competition and the sole representative in her category from UK.

“I’m feeling good about the competition – a little bit nervous but confident overall as the training that I have been undertaking will prepare me for whatever comes up. Having competed in WorldSkills UK and EuroSkills, I know what to expect from the competitions, but can’t wait to see how they do it in Abu Dhabi on a much larger scale!”

Held every two years, WorldSkills sees around 1,000 young people, aged 18-25, from all over the world come together to compete for medals in more than 40 different skills areas, including Electrical Installation, Welding, Web Design, Cooking and Bricklaying.

Betsy will travel to Abu Dhabi with 33 of her fellow Team UK members – who have beaten off thousands of apprentices and students at WorldSkills UK to gain a place on the expert team.

“I’ve been training hard at the College for the last few months so I’m feeling confident and really looking forward to getting out there and competing with the world’s best! I have been enjoying my training knowing that it is all leading up to this competition – there is a lot of pressure but it will be so worth it.

“I'd like to thank Barry Skea and Ryan Sheridan for the countless hours they have put into training me to get to this position and for introducing me to WorldSkills in the first place!”

Along with training closely with WorldSkills UK CAD expert Barry Skea, who is also the Head of Faculty for Engineering at the College, Betsy has had training sessions with fellow competitor, Jelle Hendriks from the Netherlands to help prepare for the scrutiny and standard that will be evident at the contest. She also had expert tuition from Jelle’s mentor, Bob Kramer, former WorldSkills Netherlands competitor and expert in CAD.

They participated in an ‘international stress test’ aimed to ensure that both are prepared for the pressure they will be under to concentrate on their task while in amongst the busy competition.

Barry Skea, who has trained and mentored Betsy throughout her WorldSkills journey with New College Lanarkshire, said:
“It has been absolutely inspiring watching Betsy grow from a shy, young student into a confident, professional international competitor. Her work ethic, dedication and passion for the subject has resulted in her achieving success upon success in both WorldSkills and in her career progression.

WorldSkills aims to raise global standards in the industry, along with giving young people the chance to prove their skills and be recognised on the world stage. Betsy has made the most of every opportunity given to her and deserves to be recognised on an international level. I am sure all her hard work and training will pay off in Abu Dhabi and I look forward to seeing what is next for Betsy.”

Betsy has had an extensive journey to WorldSkills since starting at New College Lanarkshire in 2015. Having had a passion for graphic communication from school, Betsy enrolled at the College’s Motherwell Campus in 2015 on the HNC Computer Aided Draughting and Design course.

Being quickly recognised as a high achiever in the skill, Betsy was encouraged to compete in regional WorldSkills competitions to get a place in the WorldSkills UK in November 2015. Winning a silver medal, Betsy was then put forward to compete in EuroSkills in Gothenburgh, December 2016 where she achieved a Medallion of Excellence.

Having been announced as a Team UK member in April 2017, Betsy has been training vigorously to ensure she is at the top of her game for Abu Dhabi. 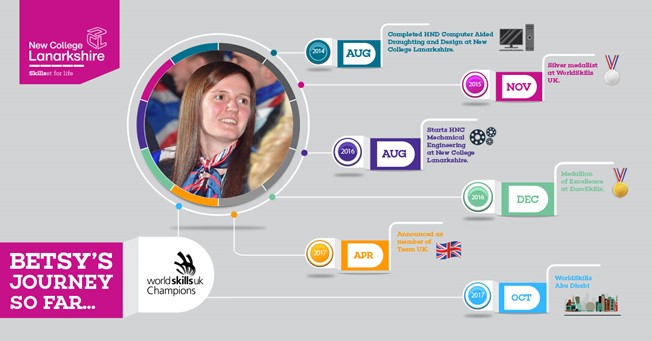 “Representing your country on the world stage is no easy feat. It takes hard work, determination and the highest level of skill. Betsy has demonstrated all of these attributes and many more and I wish her the best of luck at WorldSkills. Participation in the international WorldSkills Competition enables the UK to benchmark apprenticeship standards in this country with those around the world. It also provides us with a global platform to promote how skilled we are as a trading nation, helping the UK secure its future global competitiveness.”

New College Lanarkshire has a proud track record at WorldSkills competitions, including being named Best in UK at WorldSkills UK three times in the past four years having previously received the most medals out of any UK organisation.

To track Betsy’s progress, keep an eye on our social media pages @NCLanarkshire