Walking on to stage at Glasgow Royal Concert Hall was a proud moment for all of New College Lanarkshire’s recent graduates, but it proved extra special for four students in the audience who were presented with prizes in recognition of their achievements.

Lisa Jane Rooney received an Outstanding Achievement award in recognition of her dedication and commitment to her studies.

Lisa, who lives in Chapelhall, was nominated by her lecturers to receive the award after she overcame medical issues to complete her studies.

She was forced to withdraw from one year of study at the College due to time spent in hospital, but that only made her more determined when she returned.

Lisa said: “My lecturers were able to keep me going – and I was grateful that they had the belief in me that I could continue on.

“It’s so overwhelming to win this award. I’m so appreciative of the recognition for the hard work and effort – it has taken me so long to get here!”

Lisa chose to study science only after having to rule out a career in dentistry due to health reasons.

During her time at New College Lanarkshire, she also volunteered as a STEM ambassador to help school pupils get a taster for science, and participated in a Scottish heat of the Laboratory Technician competition skills test for WorldSkills UK.

She is now studying for an Honours degree in Chemistry at the University of the West of Scotland, after securing direct entry to second year.

Derek Steven, Curriculum & Quality Leader in the Faculty of Care & Science, said: “Lisa’s love for science, her personal resilience and commitment to learning meant she kept up with her studies by submitting work from hospital and passing her exams on her return to college two months later.

“We are so proud of Lisa, her achievements and how she has overcome significant adversity.”

Christine Hill was one of only five students to receive an award for Outstanding Achievement.

Christine, who lives in Allanton, near Newmains, spent four years studying at our Motherwell Campus, after enrolling in NQ Nail Technician in August 2015, and going on to complete NQ Advanced Beauty Practitioner, followed by a HNC and then HND in Beauty Therapy.

Having formerly worked with the NHS for 12 years as a nursing auxiliary in old age psychiatry, she has now used her qualification to gain a full-time position as a beauty therapist at the DoubleTree by Hilton hotel in Strathclyde Business Park in Bellshill.

Christine said: “When I first came to the College, I didn’t think I would last a week to be honest, but four years later I’ve got an Outstanding Achievement award, which I’m so dumbstruck about.

“Beauty Therapy is a passion for me – I like to make people feel better within themselves.

“I’m totally shocked to have won this award – I was a nervous wreck walking up for it, and I knew nothing about it so it was a massive shock to me.”

Jane Crowe, Curriculum & Quality Leader in the Faculty of Service Industries, said: “When Christine started her college course, she initially lacked in confidence, but her confidence really improved during her studies with us.

“She received excellent feedback from clients, many of whom expressed that the treatments they received were on a par, if not exceeded, treatments in salons or spas.” 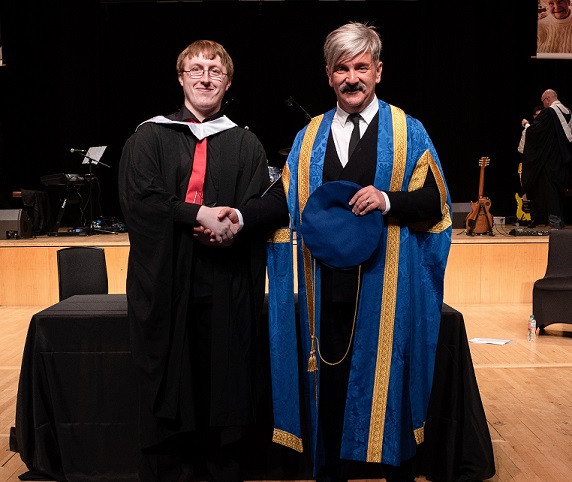 Jordan Madden was presented with an Outstanding Achievement award in recognition of his determination and personal development throughout his time at college.

It was the high point of four years of hard work for Jordan, who progressed from studying Level 5 Computing Science to completing NQ Level 6 and then HNC in Web Development.

Jordan, who lives in Motherwell, said: “There were no words to describe winning this award – whenever I hear about awards I’m always looking around to find out who has won it, but when I heard my name I couldn’t believe it.

“It’s nice to win it because I felt especially in my HND year that I improved a lot, but to know that my lecturers have said the same thing means a lot.

“They were really approachable and really helpful. I’m actually thinking of going to see them to say thank you!”

Jordan’s lecturer Fiona Murnin said: “As a student Jordan was a pleasure to have in class. He had near perfect attendance and time keeping. He came into class, worked quietly and worked very hard.

“Jordan never found the work easy, but put in 110% effort in class and at home and he got there.

“I couldn’t think of a more deserving person than Jordan to receive this award.” 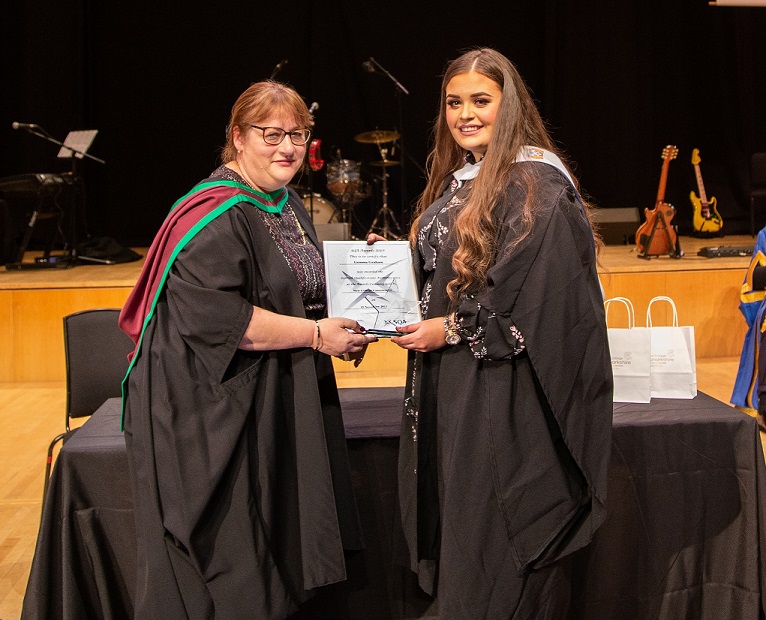 Gemma Graham was presented with two awards at the Awards Ceremony.

The former Dalziel High School pupil, who lives in Motherwell, received one of only three SQA Awards for achieving 100% in the Graded Unit exam.

She also received The Eleanor Lafferty Award for Achievement, which was set up in memory of a much-loved Law lecturer, who combined raising a family with returning to study as a mature student at one of the College’s legacy institutions, Motherwell College.

She has now progressed to studying for a law degree at the University of Strathclyde.

Gemma said: “I thought starting at NQ level was good because it’s a more gradual learning experience – and you don’t really study anything to do with law at school.

“The support from the lecturers, and Ciaran O’Neill especially, was amazing – if you ever had anything that you needed help with, they always had time and they were really helpful.

“My goal is to hopefully become a solicitor; to do a Diploma in Professional Legal Practice and two-year Traineeship and then just see from there what kind of law I want to do.

Lecturer Ciaran O’Neill commented: “In her three years at the College, Gemma matured greatly as a person and student.

“She exhibited many of the attributes that will stand her in great stead for what lies ahead – tenacity, self-discipline, self-belief and good, old-fashioned hard work.

“She was very deserving of her place at Strathclyde University Law School, where we wish her every continued success with her studies.”

During the ceremonies, a further four students were named as the recipients of awards, and these prizes were accepted on their behalf by a representative of their Faculty.