A Motherwell pupil has been presented a prestigious award for creating positive social change by running a school robotics club - after being inspired by lecturers at New College Lanarkshire.

Melissa Rodger was one of 17 inspirational young people from Scotland to be presented with a Diana Award in memory of Princess Diana on the 20th anniversary of her untimely passing.

The 15-year-old Braidhurst High pupil received the award for her passion in bringing gender diversity into the world of engineering, actively taking a lead role in encouraging her female peers to take an interest in the subject.

Through her love of science, Melissa devoted her lunchtimes and evenings to lead a robotics club for younger, more vulnerable pupils within her school, creating a fun and welcoming learning environment. Her physics sessions are now so popular that there is a waiting list of pupils who want to join.

Run by lecturers Lisa Nicholson and Michael McGuire, Melissa joins pupils from five Lanarkshire secondary pupils to get involved in the programme which inspires innovation and education in STEM subjects from a young age.

Lisa, who is a leading promoter in getting girls into STEM subjects for the College, commented: “Melissa is an extremely committed and hardworking young person who we know will go far in life. She is in inspiration to all young people, especially young girls, who aspire to get into engineering and promote gender equality in the subject.

“We are extremely proud of her for receiving this award, and are sure it will be the first of many!” 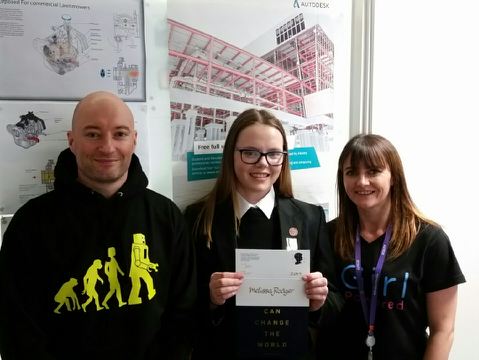 Melissa was presented the award by author Ian Rankin and Deputy Lord Provost Joan Griffiths, praised for embodying Princess Diana’s qualities of kindness, compassion and service. The award was set up in memory of Diana, Princess of Wales, and her belief that young people have the power to change the world for the better. It is committed to fostering, inspiring and developing positive change in the lives of young people through practical social action. Diana Award Holders change the lives of others; they are humanitarians, volunteers, fundraisers, campaigners, carers, and mentors.

Tessy Ojo, Chief Executive, The Diana Award, said: “We are extremely proud of Melissa’s incredible achievements. As we approach the year of the ‘Year of Young People 2018’ we are today making a commitment to offer every secondary school in Scotland our peer-led Anti-Bullying Ambassadors training programme. At The Diana Award we understand that valuing young people also means investing in them so we are delighted to be making this commitment in Scotland today.”