The Hon Lady Valerie Stacey has shared stories from her life and work in a talk at New College Lanarkshire.

Around 50 staff and students enjoyed listening to one of Scotland’s most senior judges as she outlined her career journey at the Motherwell Campus.

Her engaging address spanned over 40 years spent working in Scots law, including her decision to study law at the University of Edinburgh and her time as a solicitor in Motherwell.

Lady Stacey was admitted to the Faculty of Advocates in 1987, took silk in 1999, and was appointed as a Judge of the Supreme Courts in January 2009.

The talk was organised by lecturer and former criminal defence solicitor Ciaran O’Neill, who while in private practice conducted hundreds of criminal trials in Sheriff Courts all over Scotland. 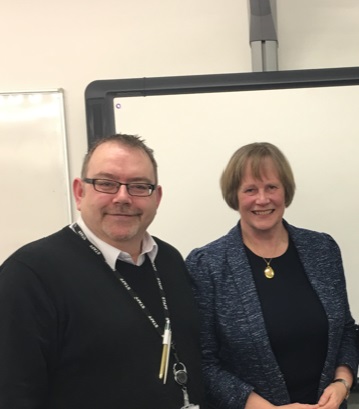 He said: “I believe that experiential learning is fundamental to the success of a student’s learning.

“I was lucky to have made substantial contacts over my time as a solicitor and it is great to be able to call on these now in order to benefit my students.

“I organise as many talks and trips as possible to give my students the broadest possible approach to studying Scots law.”

Ciaran added: “I believe there is a distinctly more ‘hands-on’ approach at college compared with university study.

“In that sense, it prepares the students well for what will be a tough few years ahead.

“Also, there is generally more scope for a ‘one-to-one’ approach and, of course, plenty of extra-curricular activities by way of talks and visits.”