Students were celebrated in front of classmates, friends and family along with special guests of the College, including local councillors, MPs, MSPs and Lanarkshire Regional Board members.

“It was a privilege to meet each and every student who has worked so hard during their time at New College Lanarkshire to reach this prestigious stage in their career path.

Our annual awards ceremonies are the pinnacle of the academic year, celebrating everything that our students have achieved during their time at New College Lanarkshire.

It is a special occasion for our staff also to see how far their students have come and for family and friends to join students in a celebration of their achievement. For many students, this award will be part of a continuing educational process and will perhaps be an important first step in a future path of lifelong learning.

I wish all those who have completed their studies at New College Lanarkshire the greatest success for the future, whether they go on to further study or into employment, I am confident that the vocational qualification achieved will help shape the future workforce.”

Taking place across two ceremonies, over 500 students from across the College’s six faculties – Business, Social Science and Sport, Care and Science, Computing and Creative Industries, Engineering, Service Industries and Supported Learning – took to the stage to be commended for their hard work during their time at the College. 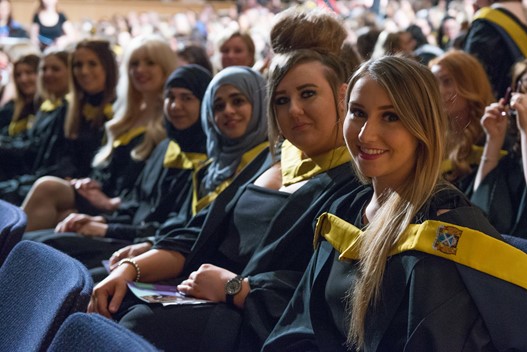 Special awards were also presented to individual students for outstanding achievements over the past year, including to Betsy Crosbie, a HND Mechanical Engineering student who recently competed in WorldSkills Abu Dhabi, bringing home a Medallion of Excellence.

An award sponsored by the Scottish Qualifications Authority was also presented at each ceremony to two students who received the highest graded unit mark across the College. Caitlin Lawson, 21 from Cumbernauld who studies HND Dental Nursing at the Coatbridge Campus came out on top, joining Julianna Taggart, 24 from Kilsyth who gained the highest graded unit as part of her HNC Accounting at the Cumbernauld Campus. Both received a special engraved award, certificate and £50 National Book Token.

Four students were also awarded for outstanding achievement, each receiving a £250 cheque sponsored by Ede & Ravenscroft, who provide the gowns and photography for the awards ceremony.

Lisa Morley, 33 from Wishaw was first up for her dedication to her studies throughout the HNC Social Services course – a change of direction for Lisa which has paid off as she now studies in year two of the BA Social Work degree at Glasgow Caledonian University.

24-year-old HND Software Development student Ursula Manning was also recognised for her ongoing academic excellence in the subject, travelling through from Edinburgh every day and never missing a deadline.

From Lennoxtown, 30-year-old Laura Baird received an award for her excellent commitment and outstanding results on the HNC Built Environment course at the Motherwell Campus, despite facing various personal challenges throughout her time on the course.

The final prize was given to Julie Ann Mullen from Hamilton, who won the award for ongoing academic excellence while completing the BA Hospitality Business Management degree. The 23-year-old gained consistently high marks and was recognised for her exceptional attitude while on work placement.

Aside from prize-giving, the ceremonies also included a live performance from student band, The Kahoots, made up of HND Music students from the Motherwell Campus, while the closing remarks were delivered by Chair of the Lanarkshire Regional Board, Linda McTavish. Daniel Moore, President of the Students’ Association also delivered a vote of thanks. 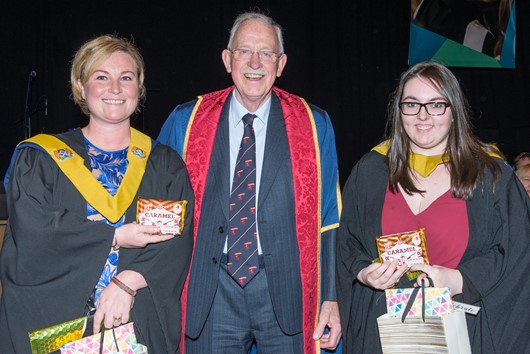 Two lucky students at each ceremony were also delighted to find a golden ticket under their seat, winning themselves a tablet each. The College also welcomed back Fellow of New College Lanarkshire, Boyd Tunnock, who received the first fellowship award of its kind at last year’s ceremonies.

For images of the day, visit the College’s Facebook page.