Mark Savage was victorious at the SECTT West of Scotland Apprentice of the Year competition, which was held recently at our Motherwell Campus.

The 23-year-old from Holytown impressed on a practical test and a theory exam.

He was among 12 apprentices to compete, who were drawn from five colleges across the Greater Glasgow area, Ayrshire and Dumfries and Galloway.

Mark, who is employed by Bellshill-based JFM Electrical, said: “It feels brilliant to win this.

“I was really nervous doing the practical, but once I got started I was fine and it was so worth it.

“Being out with my employer has been a really good experience and I’ve had lots of support from the College, too, so I’m really chuffed to have shown my hard work by winning this.” 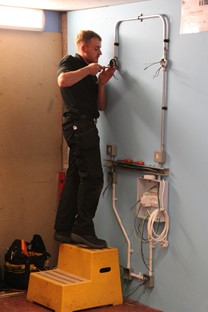 All participating apprentices received a certificate at the awards ceremony, which was attended by family, friends, employers and lecturers.

Mark, who also received a Makita drill driver, will now go forward to a final in September when an expert panel will decide on gold, silver and bronze positions.

The event was organised by SECTT (Scottish Electrical Charitable Training Trust), which runs the only industry-approved training scheme for electrical apprenticeships in Scotland.

“Both the practical and theory parts of the competition are difficult, however the candidates are the best from their college groups and must have excelled to be selected to compete.

“Mark’s work was excellent – both his practical and theory scores were very high.”

“Our staff work very hard to ensure that we provide the highest quality training and education, and this can be seen through our strong partnership with SECTT and the continued success of our learners.

“Competitions like this build confidence levels in our learners who can demonstrate their ability, not only at a local level, but also at a national level.

“We wish Mark every success in the future.”