Zoe Heggie was picked to sing to an audience of 3,000 people at the annual Glamis Prom, which took place at the imposing Angus castle last weekend. She featured on a bill alongside West End names including Kerry Ellis and Norman Bowman, The Voice star Saskia Eng and River City’s Tom Urie. And now she’s back studying at our Motherwell Campus where she will be amongst the first students to benefit from a new partnership with Queen Margaret University. 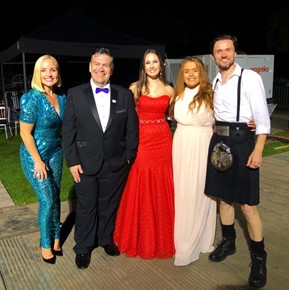 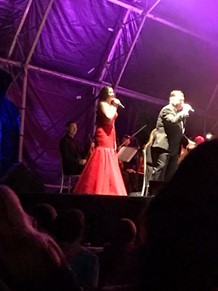 The 20-year-old won a competition entitled ‘Search for a Star’ organised by The Courier newspaper in her native Dundee. An online video of Zoe singing won a public vote, seeing off more than 2,000 other hopefuls in the process. And within weeks of finding out that she had won, Zoe dug out her school prom dress and wowed thousands of onlookers with a rendition of Phantom of the Opera’s ‘Wishing You Were Somehow Here Again’. She also performed in a group finale of The Beatles’ ‘Hey Jude’ at the event, which was themed around the Great British Songbook.

“It was the last Prom this year, so it was outstanding to have been a part of such an amazing event. I didn’t have a rehearsal with the orchestra beforehand, so when I performed for all these people it was actually the first time that I’d performed the song properly. The orchestra was phenomenal.

I was so nervous. I know I could have done better, but it was a once-in-a-lifetime opportunity and I just had to go for it. I’ve always loved musical theatre – I’ve been doing it since I was a child and to have the opportunity to come to New College Lanarkshire has been amazing.”

Zoe completed her HNC and HND in Musical Theatre at New College Lanarkshire. During her studies here, she has performed in the chorus of a pantomime, Cinderella, and took the lead role of Sarah in a production of Our House, both of which were staged at the Town House in Hamilton.

She and 15 fellow BA Musical Theatre coursemates, alongside 16 BA Acting students, recently travelled to Edinburgh to meet staff from Queen Margaret University who will now validate their degree courses.

“Queen Margaret University has welcomed us all so well and the staff were lovely. New College Lanarkshire has helped all of us begin our careers in the industry. I was delighted to get a place on the degree course.”

Earlier this year, New College Lanarkshire announced the partnership with Queen Margaret University to validate its BA Acting and BA Musical Theatre courses after a partnership with its former validator, Northumbria University, came to an end.

“Zoe is a talented and dedicated student whose confidence and performance skills have developed immensely during the course of her studies in Musical Theatre at New College Lanarkshire. Performing to such a large crowd at Glamis Castle in the company of esteemed West End figures will give her invaluable experience for her career in the industry.

Our partnership with Queen Margaret University will allow Zoe and her fellow students to gain a degree that will further develop their skillsets in the performing arts and enhance their opportunities for the future.”