The company, which specialises in delivering complex building developments in sectors as diverse as aviation, healthcare, manufacturing, education and life sciences, has offices in Eurocentral in Motherwell.

They currently employ 53 people in Motherwell, a number of which have studied Computer Aided Architectural Design and Technology (CAADT) at New College Lanarkshire or its legacy institution, Motherwell College.

The company has established close links with the Architectural Technology team at our Motherwell Campus through inviting students into work placements and by attending the annual showcase staged by the Faculty of Computing and Creative Industries.

Laura James, Head of Scotland for BakerHicks, said: “The candidates who come to us from New College Lanarkshire have a really good base knowledge of how to use Autodesk Revit on projects. For us as a multi-disciplinary consultancy, where all teams are working in Revit, this knowledge is invaluable.

“We have been really impressed with the New College Lanarkshire graduates’ ability to come in and hit the ground running. The course is maybe more architectural-focused, but the skills that they’re learning at NCL allows them to drop into the other disciplines very easily.”

Minahil Nawaz (who is known as Mona) has been employed as a Trainee Technician in BakerHicks’ MEP team since September.

The 21-year-old from Newarthill completed HNC and HND levels of study in CAADT at New College Lanarkshire after leaving Brannock High School.

Mona said: “I’ve not been here for long but I love it – my role involves using the drawings that the engineers have created and taking them into CAD and Revit.

“The College course gave me a really good knowledge base – it does have a digital architectural bias but it teaches you a lot of different things which gives you multiple skills.

“I feel like the lecturers supported me personally a lot. They were always really understanding if you were stressed or if you found something difficult.

“I’ve got so much experience and enjoyed so many opportunities from going to college that I wouldn’t have had if I had studied at university. I’ve gained so much.”

Senior BIM Co-ordinator Alisder Brown, meanwhile, was one of the first former NCL students to secure a job at BakerHicks more than four years ago. 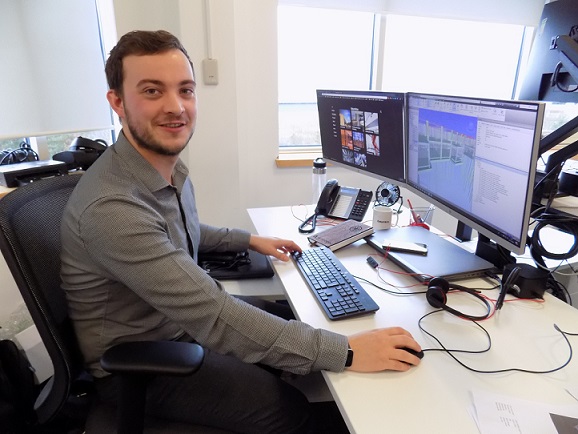 Having served as a Royal Navy engineer submariner, the 30-year-old initially worked in training and tech support for Autodesk before joining BakerHicks, where he currently oversees around 14 projects.

His role involves amalgamating 3D models provided by all the different disciplines to identify any issues before construction begins, as well as ensuring all design team and sub-contractors are compliant with the project and industry Building Information Modelling (BIM) standards.

Alisder said: “Very few institutions teach Autodesk Revit, which is the software that we use at BakerHicks, but pretty much from day one at NCL, students are using CAD and Revit in the Motherwell Campus.

“It’s pushed hard which is good because that’s what the industry uses – and it gives you the tools you need when you’re looking for employment.

“The NCL lecturers are really good at keeping in touch and asking what is happening in industry just now so that they can update the course.

“They would invite in industry professionals to give us guest lectures and our Graded Units would be based on a real-life scenario given to us by someone working in the construction industry.”

Three of the former students who joined BakerHicks after graduating last year – Mona Nawaz, Connor Patterson and Darren Houston – have recently been named as part of the UK WorldSkills Squad with the chance to represent the UK in the Building Information Modelling competition at WorldSkills Shanghai in 2021.

CAADT lecturer Michael McGuire said: “We owe a great deal of thanks to all of our industry partners.

“Companies such as BakerHicks continually support our courses in many ways – and the work placement week that they offer to our second year HND students is invaluable in providing a real-world experience.

“This partnership is beneficial to all involved, as companies are always on the look-out for new and emerging talent, so they help our lecturers to design the perfect courses to fill that demand.

“Modules such as model making have been dropped in favour of digital construction modules.

“Units in 3D printing and Building Information Modelling have been introduced and resulted in skyrocketing employment statistics for students leaving after just two years of study.”