Oliwia Sierakowska is still only 18 years-old – but she’s about to enter the third year of a degree programme at Edinburgh Napier University after completing her HND at New College Lanarkshire.

Oliwia will begin her studies for BSc Architectural Technology later this month.

She gained direct entry to third year after spending two years studying at our Motherwell Campus. After enrolling at NCL in August 2018, she completed HNC then HND Computer Aided Architectural Design and Technology (CAADT).

Oliwia completed her HND qualification during lockdown – and achieved an unconditional place at Napier after achieving an ‘A’ for her Graded Unit.

She said: “When lockdown started, I found it really hard to focus on college work with everything that was going on.

“But my lecturers were really supportive – as well as giving us more time for completing exercises, they also made sure to check up on us regularly by hosting Zoom meetings for the whole class.

“They posted on our course group chat daily, which kept us fully engaged, and they didn’t put any pressure on us and were extremely understanding.”

In January, all HND CAADT students (pictured below) completed a one-week work placement with engineering, construction and design companies across the central belt of Scotland. 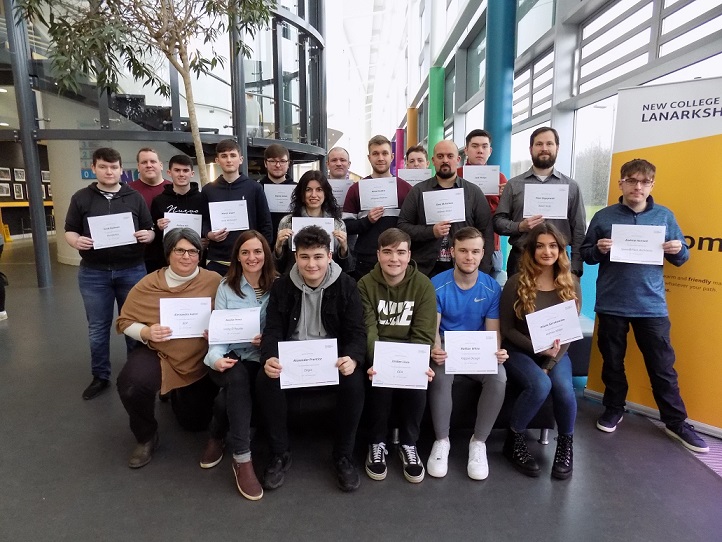 Oliwia completed her placement with award-winning architectural practice Holmes Miller, which is based in Finnieston in Glasgow.

She was tasked with designing an architectural studio to be used by 12 employees – and was taken on a site visit to see a primary school currently under construction in Edinburgh.

Oliwia added: “It was a really good week – we were given a brief and different specifications and we had to design a studio with that in mind.

“I enjoyed the site visit – it was really good to be able to visualise how a drawing becomes a building.

“Some of the directors checked our drawings and had a chat with us during the placement.

“They said that the level of detail that we learn in the College is much higher than some people who have worked in the industry for years. That was really good to hear.”

Oliwia chose to study at New College Lanarkshire on the recommendation of her mum and her uncles who were previously students.

She had enjoyed studying Graphic Communication in S4 and S5 at high school, but was unable to progress to Advanced Higher in S6, so chose to apply to study at NCL.

Oliwia said: “I hadn’t planned on leaving school after fifth year, but there wasn’t a higher level of graphics open to me at school, and I knew that I really wanted to do something with that.

“I applied for two courses online via the College’s website. I had interviews for both and I got a conditional offer from both courses. I chose Architectural Technology and I’ve really enjoyed it.

“I’d like to be involved in designing homes when I finish – I like the more creative side.”

In February, the College was named Best Training Provider at the BIM Awards 2020, which honours innovators and pioneers of digital construction across the UK.

Read more about our range of CAD courses: