STUDENTS who helped New College Lanarkshire reach the top spot of a prestigious skills competition for the third time in four years have been recognised at the Scottish Parliament.

Jamie Hepburn MSP congratulated 12 students from the College at an event hosted by Clare Adamson MSP to celebrate their recent achievements at WorldSkills UK – which once again put New College Lanarkshire at the top of the leader board for skills provision in the UK.

The group was congratulated by both MSPs alongside Linda Fabiani MSP and Graham Simpson MSP for finishing the national competition with four gold, two silver, four bronze and two highly commended medals.

Following the formal congratulations, students were given an opportunity to speak with the MSPs to discuss their vocational skills and highlight the importance of WorldSkills in Scotland.

The students were then joined by staff members, who put in hours of voluntary training, to get a tour of the parliament chamber. 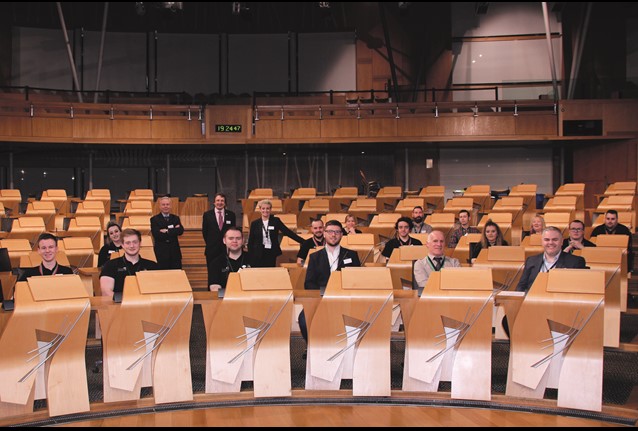 “To be brought to the parliament and recognised for our achievements is incredible – it’s a really amazing place. Since the competition we have been so busy that we’ve not had a chance to properly celebrate and reflect on our hard work. It’s been a great experience to be praised in the Scottish Parliament.”

“Being congratulated at the Scottish Parliament is a testament to the tremendous amount of work and dedication these students put in to their chosen skill. Their success is something that should be shouted about as it is a credit to the standard of further education provision in Scotland. All students who attended had a very memorable experience and I would like to thank Jamie Hepburn MSP and Clare Adamson MSP for taking time out of their busy schedules to recognise the stars of our future.”

“We invited these students to parliament to highlight the good work carried out in New College Lanarkshire. Each and every competitor is a positive reflection on the College and on themselves. Competitions like WorldSkills give students the chance to showcase their skills and demonstrate the education and passion they have for a subject matter – and these students certainly show that.”