Scotland’s student women’s football team has won the Home Nations 2019 tournament in Wales – with the help of a student from New College Lanarkshire.

Erin Wilson, who studies HND Coaching and Developing Sport at our Broadwood Campus, was one of only two students from further education institutions selected for the 18-strong squad.

The competition, held at the University of South Wales in Cardiff, saw Scottish Student Sport Women’s Team beating hosts Wales 4–3 on penalties after the match ended 3–3, while they beat England 1–0 in a match the following day.

The 19-year-old former Cumbernauld Academy pupil, who plays for Hamilton Academical WFC, said: “It was a great feeling to win the Home Nations tournament in Wales and to be undefeated along the way.

“All the girls worked hard to make the achievement, so when the full-time whistle blew against England in our final game we were all excited.

“Coming on at half-time against England was my personal highlight – I knew when I came on I had to prove myself and play well.

“I felt that I did this and was proud of my performance when I came off the pitch. England were pushing to try and get a goal so we had to work hard to keep our lead in the game.”

With her sights set on becoming a PE teacher, Erin plans to progress to university after completing the HND course this summer. 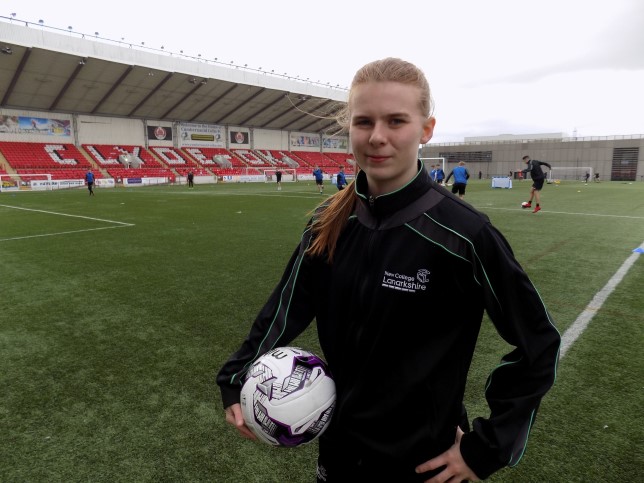 She chose to study at the specialist sports campus at Broadwood because of its facilities, including use of the 8,000-seater stadium and a well-equipped gym.

Erin added: “Going forward I am looking to push myself further within football and challenge myself.

“I aim to keep working hard and developing myself as a player. I would love to be selected again next year for the tournament as it was a great experience.

“I also aim to play in the Women's Premier League (SWPL). It would be a great test for myself to play with and against some very experienced and talented players within the women's game and would only further develop me as a player.”

Taught at the Broadwood Campus, it aims to enhance football development whilst increasing education and employment opportunities.

Todd Lumsden, Curriculum and Quality Leader, said: “Erin has really excelled in her HND Coaching and Developing Sport year, developing her coaching practice along with her academic ability.

“Erin is a talented footballer and it is great to see her playing a role in helping Scottish Student Sport (SSS) Women’s team maintain their unbeaten international record for the last three years.

“The new Female Football Performance course here at Broadwood Campus will allow players to develop their football ability whilst continuing their education in Sports coaching and fitness-related subjects.

“It will undoubtedly improve all aspects of the player, whilst creating a career pathway into the coaching or fitness industry.”

Read more about the opportunities for aspiring footballers here: