Student athlete spurred on by bronze at BUCS

A Sport student from New College Lanarkshire has been spurred on in his athletics career after claiming a bronze medal at the BUCS Indoor Championships in Sheffield in February. 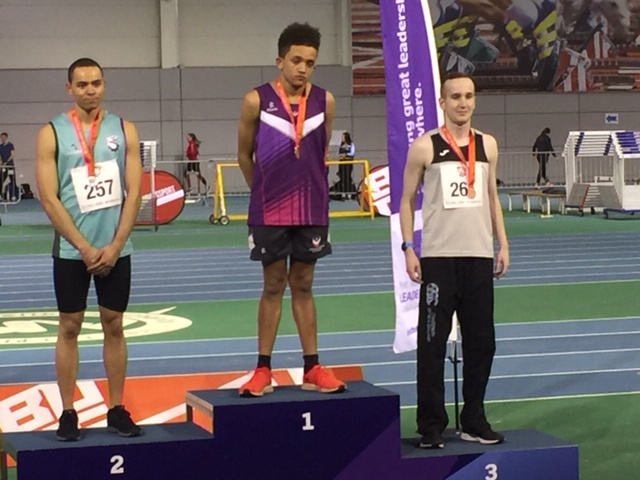 The 18-year-old, who lives in Hamilton, is continuing to keep up with both his training and studies during lockdown.

He takes part in personal training sessions five times a week via Zoom, in addition to distance running and sprinting in a field near his home.

British Athletics­ is also in regular contact with Alexander to organise group meetings and to send updates on training, nutrition and mental wellbeing.

The former Hamilton Grammar pupil, who studies NQ Level 4 Access to Sport and Fitness, hopes to continue to make a name for himself in both mainstream and disability athletics when the international and domestic competitions return.

Alexander, who normally competes in 200m and 400m distances, is hopeful of securing a place in the GB Paralympic team for the Tokyo Paralympic Games, now due to take place in August 2021.

Alexander said: “I was happy to take home a bronze medal from BUCS as 60m is not the distance that I normally run.

“I enjoyed the experience of competing in BUCS for the first time.

“I’d like to thank the College and the Students’ Association for all their help and funding for Sheffield.”

Alexander is a member of Whitemoss Amateur Athletics Club, which is normally based at John Wright Sports Centre in East Kilbride.

In March 2019, he won a silver medal in 400m at the Special Olympics World Games in Abu Dhabi, where he also finished in fifth place in the 800m final and fourth in 4x100m relay.

He represented Great Britain at the World Para Athletics Junior Championships in Switzerland in August, finishing in fourth place in both 100m and 200m.