A student from New College Lanarkshire has won a bronze medal for wrestling at a European competition in Finland.

Ross Connelly (centre) was part of the Great Britain squad selected to compete at the Helsinki Open 2018.

The 13th annual wrestling tournament attracted almost 400 competitors from across the continent.

Ross, who is currently a student of HNC Coaching and Developing Sport at our Broadwood Campus, said: “I beat opponents from Czech Republic, Poland and Finland and lost to a strong Finnish opponent who went on to win the competition.

“I was happy in the end to come away with the bronze medal after five tough matches, although disappointed about losing in the semi-finals.” 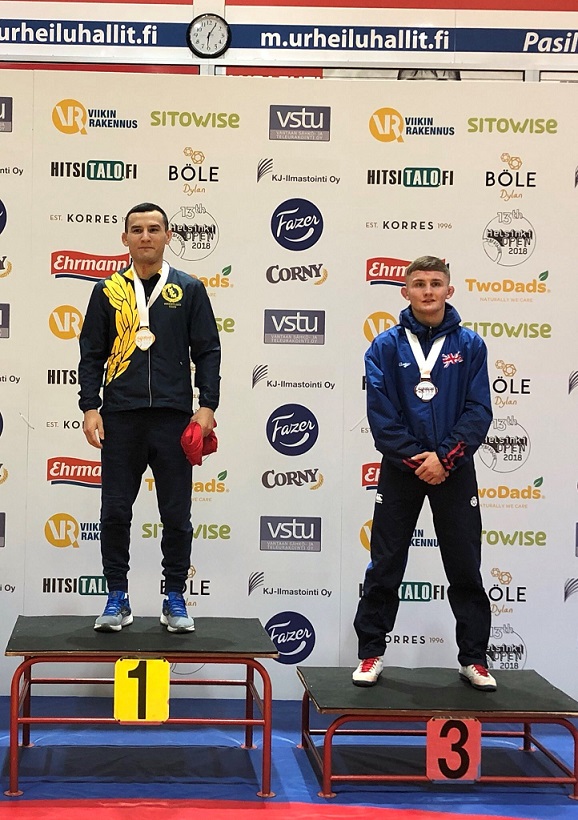 Ross, who competed in the 61kg category, was selected by a British Wrestling selection panel based on his attendance at training sessions and his performance at the British Senior Championships in October.

He began wrestling at the age of five and followed in the footsteps of his father, who was a wrestler and coach with Tryst Lions Wrestling Club in Cumbernauld.

Ross is now in contention to compete at the Flatz Open in Austria in February 2019 and has set his sights on representing Scotland at the Birmingham 2022 Commonwealth Games.

The former pupil of Cumbernauld Academy added: “I try to remain focused on both my training and studies equally, as well as balancing my time well.

“I wouldn’t be able to do this without the support of the staff at New College Lanarkshire.

“The support from lecturers has been great and a massive help. From giving me time off college to train and compete internationally, to them asking daily how I am getting on with wrestling, it’s good to know they are so supportive.”

Curriculum and Quality Leader Todd Lumsden said: “Ross is a mature young man who is very professional in his approach to his studies and focused on developing his talent in wrestling.

“The teaching team at the College work with his wrestling coaches to support Ross in combining his studies with the calendar of international competitions.”