New College Lanarkshire’s annual Awards Ceremonies were memorable for all graduands, but they proved extra special for five students who excelled in the course of their studies.

Five Awards for Academic Excellence were announced over the two ceremonies, with each winner receiving a cheque for £200 from sponsors Ede & Ravenscroft.

These were given to: 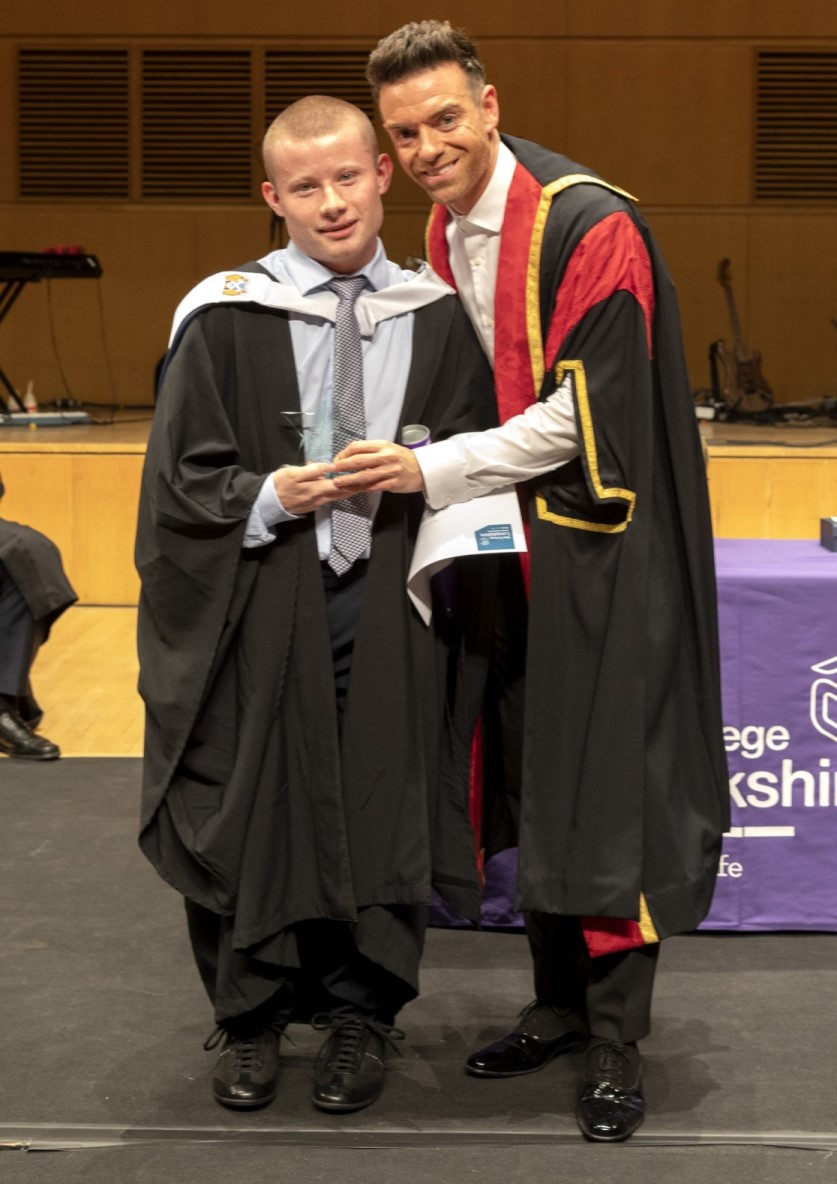 Craig Brown graduated in HND Coaching and Developing Sport from our Motherwell Campus.

His lecturers praised his attitude, discipline and his ability to overcome challenges to excel in both his coursework and his extra-curricular activities in promoting and playing wheelchair basketball.

Craig, 20, from Larkhall, had both legs and four fingers on his left hand amputated after contracting meningococcal meningitis when he was just 18 months old.

He enrolled in HNC Coaching and Developing Sport at New College Lanarkshire straight after finishing sixth year at Larkhall Academy.

He progressed to HND level and is now studying for a degree in Sports Coaching at University of the West of Scotland in Hamilton. His career goal is to become a PE teacher.

Craig said: “Being a student at New College Lanarkshire has been great. The staff facilitated everything for me; they were always there to help and if I had any issues at all, then I could go to them.”

Curriculum and Quality Leader Jim Griffin said: “Craig’s disciplined and diligent approach to coursework, positive mental attitude to life, and his sense of humour require special recognition alongside qualities which relate to his determination, motivation, selflessness and achievements.

“He is a perfect role model to everyone, demonstrating that regardless of their personal challenges and ability, everyone can succeed!” 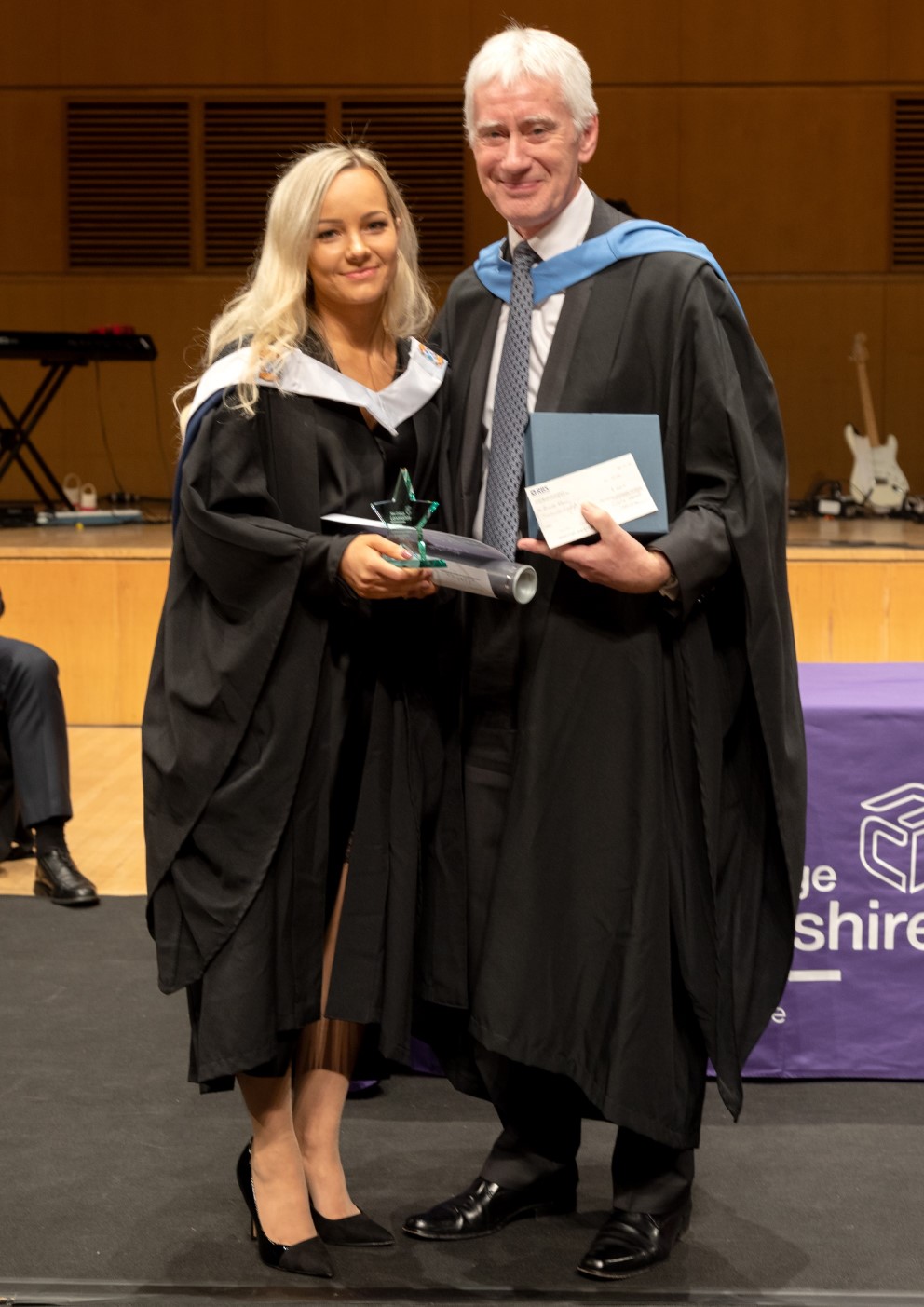 Ernesta Kleme graduated in HND Beauty Therapy from our Motherwell Campus and is now employed as a beauty therapist at Perfection Wax Boutique & Skin Clinic in Wishaw.

Her lecturers praised her exceptional commitment to learning throughout her four years as a student at New College Lanarkshire.

Originally from Lithuania, Ernesta and her husband moved to Scotland from London after the birth of their son.

Ernesta, 31, from Motherwell, said: “A few friends told me about New College Lanarkshire; that it is a great college and it has a nursery to support parents who want to study.

“I feel very honoured and happy to have won this award. I feel that all my hard work paid off, as I have always put 100% into everything and tried my best.”

Ernesta’s study pathway started with Level 5 Beauty Care and Make-up in 2014, then NQ Advanced Beauty Care, followed by HNC and latterly HND Beauty Therapy, gaining an ‘A’ for her Graded Unit.

Curriculum and Quality Leader Jane Crowe said: “The feedback received from clients who received treatments from Ernesta about her skills and client care was exceptional.

“She is conscientious, shows great initiative and has a passion to succeed in this industry.”

Joanne Chivers was nominated by her lecturers after studying HNC Social Services at the College’s Motherwell Campus.

The 31-year-old from Wishaw was able to complete her coursework, achieve the full complement of work placement hours and give birth to her fifth child during her HNC year.

The teaching staff worked closely with Joanne to create a plan that would allow her to submit work ahead of her peers in preparation for the arrival – and she returned to her studies six weeks after having her son.

Joanne said: “It’s unbelievable to know that the staff would even think of me for this award. It’s an honour.

“There were times when I felt like giving up, but they wouldn’t give up on me.”

Having returned to full-time education as a mature student, Joanne previously studied National 5 in Care and NC Health and Social Care.

Curriculum and Quality Leader Loraine McDermott said: “Joanne continued to attend college and submit assessments of an extremely high academic standard despite many major challenges during her three years of study.”

Julie Savage, 24, from Airdrie, graduated in HND Photography from our Motherwell Campus.

She was praised by her lecturers for her ability to excel in her studies while preparing to give birth to her first child, Evie, shortly after the Christmas holidays.

Curriculum and Quality Leader Lewis Napier said: “Julie’s story reminds me of why I do the job – to see someone with such determination and dedication just defies belief at times.”

Julie initially completed the HNC Photography course in 2012 and worked for five years in an unfulfilling job, before returning to full-time study, achieving an ‘A’ in the Graded Unit of her HND.

Julie said: “I knew that photography was my thing – and I realised that having the HND qualification was what I needed to do something good with my life.

“Anyone who knows me knows that I absolutely thrived at college – the lecturers are fantastic and I can’t sing their praises enough.”

The former Airdrie Academy pupil is now employed full-time as a Digital Print Operator with Arnold Clark in Glasgow. 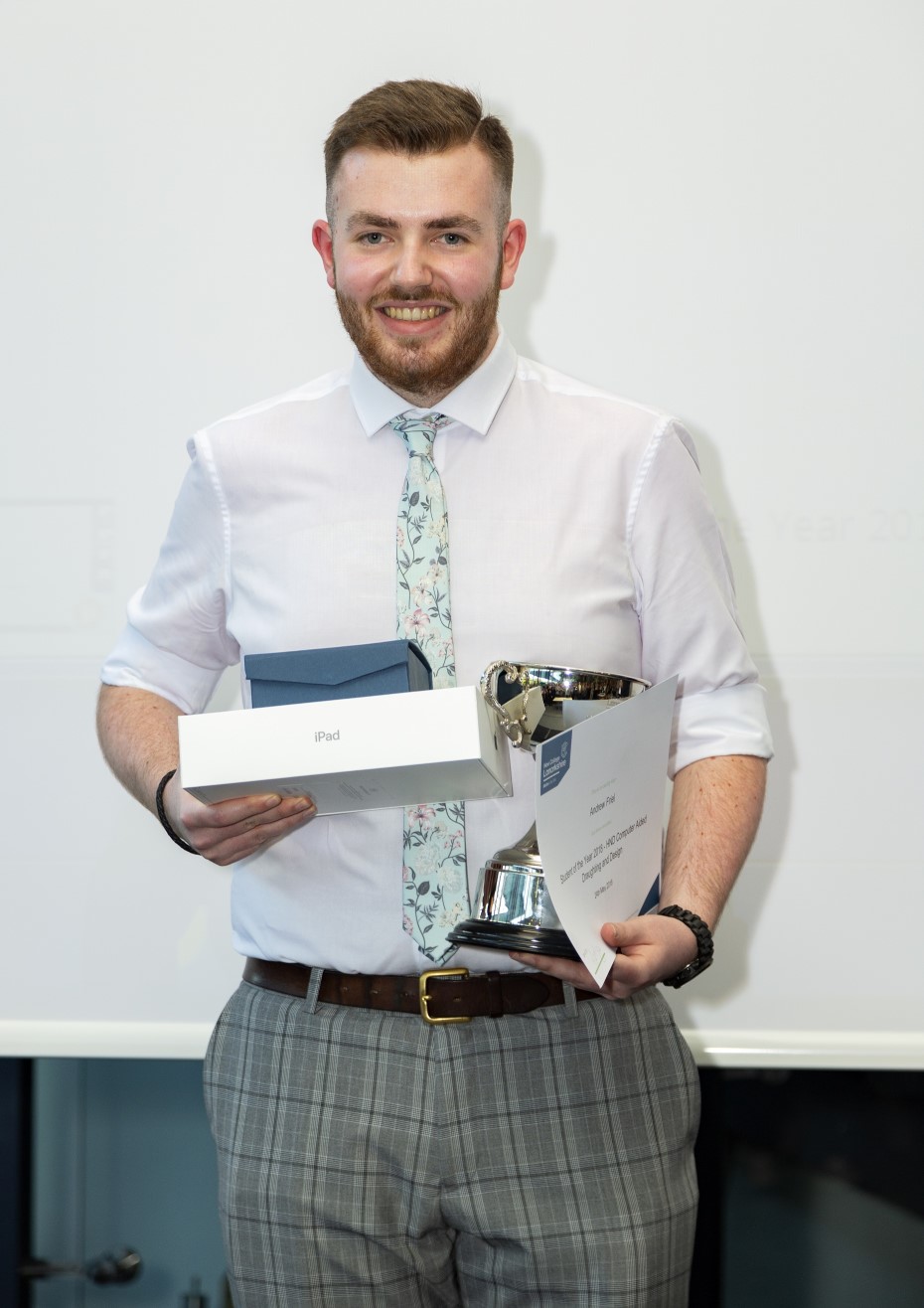 Andrew Friel graduated in HND Computer Aided Draughting and Design (CADD), which he studied at our Motherwell Campus.

The 20-year-old from Cambuslang was unable to pick up the trophy in person – as he was one of 23 NCL students competing at WorldSkills UK in Birmingham at the same time.

Andrew said: “I was really delighted to have found out that I’d even been nominated for another award at the College – it came as quite a shock.

“I think my work stood out to my lecturers because I put as much time into it as I could, and I gave it my best effort.

“It's a shame that I wasn't able to accept the award at graduation in person, but if anything that was a great problem to have!”

His lecturer, Ryan Sheridan, said: “Andrew demonstrated excellent skills and knowledge across all subjects. His endeavour, resilience and dogged determination to be successful will stand him in good stead in his future career.”

He has now progressed to the third year of a degree at the University of the West of Scotland.